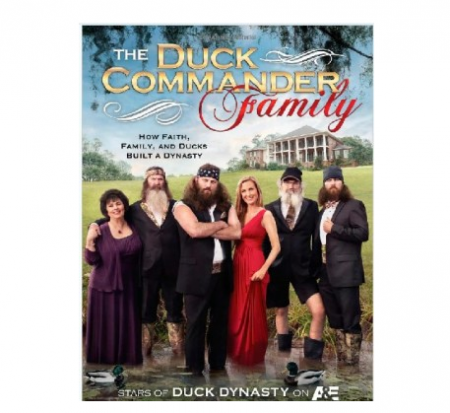 If you’ve heard of Duck Dynasty and you’re wondering what all the craze is about, you might check out the book, The Duck Commander Family: how faith, family, and ducks created a dynasty written by the CEO of Duck Commander, Willie Robertson and his wife Korie Robertson.  If you’ve watched A&E’s reality television series Duck Dynasty and you’re wondering how they ever make a dime on duck calls with all the goofing around they do, you might also check out this book.

Every chapter is entitled with a type of food, such as Chapter Three: Fried Catfish.  The chapters also begin with a Bible verse and end with a recipe.   In this book Willie shares life lessons he learned from his parents, Phil and Kay.  And with sixteen pages of color pictures, readers can see the Robertson men before the beards and their love of family, food, and duck hunting.

I was surprised to find out that as newlyweds, Willie tried to get Korie to eat frozen fish out of box.  This doesn’t sound like something the CEO of Duck Commander would do.  In this book, Korie admits that she is not a good cook.  On A&E’s Duck Dynasty, viewers regularly see Kay in the kitchen cooking, and Willie thinks Phil is also a good cook.   By the way, Kay has her own book coming out later this fall, Miss Kay’s Duck Commander Kitchen: Faith, Family, and Food–Bringing Our Home to Your Table.

Duck Commander is truly a family business.  Phil’s wife Kay, his brother Si, Phil’s children (Alan, Jase, Willie, and Jep), their spouses, his grandchildren, those married into the family, and family friends have all played a part in the business.   Willie wrote, “Everyone at Duck Commander brings something special to the table, and rather than fighting against one another, we complement each other.”

Willie’s father Phil was the original CEO of Duck Commander, which he started in 1973.  In this book Willie wrote about the history of duck calls and how Phil earned his name as the Duck Commander.  While hunting in 1972, a friend of Phil’s said, “Man, you weren’t calling those ducks, you were commanding them!”

In response to the challenges of a family business, Willie wrote, “I believe our faith is what sets us apart.  It’s not about our beards, our success, or our hunting skills.  …We live our lives trusting that God’s promises are real.”

Willie’s wife Korie is also an author of this book.  The font of the text is printed differently, so readers can distinguish between Willie and Korie’s side of the story.   Both of them wrote about what it was like growing up in Louisiana, how they met, and their marriage.  Korie shared, “Willie’s actually very romantic. He’s written me a ton of love notes and even poems.”   They also wrote about parenting their biological children, an adopted son, and an exchange student who has become part of their family.

I would recommend The Duck Commander Family to anyone who likes to watch A&E’s Duck Dynasty.  I think those who are trying to start a family business would also enjoy and be encouraged by this book.  Willie ends the book with his advice, but I’ll save that for you to read.