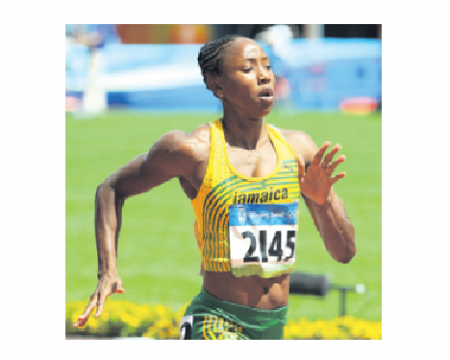 Sherone Simpson, Jamaican Beijing Olympic 100 metres silver medallist  has confirmed that she was notified on on Sunday that she returned a doping violation at the country’s National Championships last month.

“I was notified on July 14, 2013 that my urine sample taken at the National Senior Championship, June 21, 2013 after the 100m finals returned a positive analytical finding for a stimulant, oxilofrine (methylsynephrine),” Simpson’s statement said. “This is a very difficult time for me,” added the Athens Olympics relay gold medallist.

The sprinter, who trains at the MVP rack and field club, said she never knowingly  ingested the banned drug.
“As an athlete,  I know I am responsible for whatever that goes into my body. I would not intentionally take an illegal substance of any form into my system.” Simpson’s statement continued.

Simpson, who has sprint relay silver medals from the 2005 and 2011 world championships said “My team and I will try to do everything we can to get this issue dealt with as best as we can”.

She also apologised to her to her family and fans. “ I want to sincerely say to my family (especially my parents, grandparents and siblings), Paul Doyle (agent), MVP track club, follow athletes, former sponsors and the rest of Jamaica that l am deeply sorry for any hurt or embarrassment this positive test may have caused.”

Earleir on Sunday Chairman of JADCO Dr. Herd Elliott, confirmed that the agency had been notified of the doping violations.
“Yes JADCO have received reports of adverse analytical findings from “A” samples. The process of the result management has commenced in accordance with the JADCO Anti-doping rules.” Dr. Elliott said

“We cannot disclose any further information until the athletes have responded to notification of the “A” sample.”