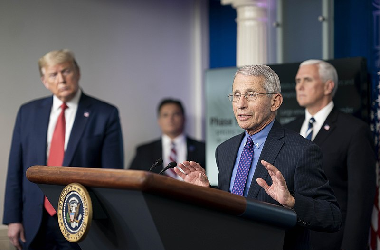 Anthony Fauci, the National Institute of Allergy and Infectious Diseases director and President Biden’s chief medical adviser, has expressed doubt about the origin of the coronavirus disease and supports the call for further investigation.

When pressed on the matter recently by a reporter, Fauci opines that he is “not convinced” it developed naturally.

“I am not convinced about that. I think we should continue to investigate what went on in China until we continue to find out to the best of our ability what happened,” Fauci said.

“Certainly, the people who investigated it say it likely was the emergence from an animal reservoir that then infected individuals, but it could have been something else, and we need to find that out. So, you know, that’s the reason why I said I’m perfectly in favor of any investigation that looks into the origin of the virus,” he added.

Meanwhile, many people support the claim of a leak from a Wuhan Laboratory in China resulted in the spread of the coronavirus disease.

The Wall Street Journal reported that three researchers from the Wuhan Institute of Virology were sick around November 2019 and hospitalized.

However, no one knows how all three researchers got sick or why, according to the undisclosed U.S. intelligence report.

At the same time, the Biden administration has expressed concerns that the Chinese government was “not transparent from the beginning.”

China, however, continues to deny the allegation that the virus somehow was created in their lab and was leaked.

China’s foreign ministry cited the team led by the World Health Organization, which said it was unlikely that the virus came from China.

“The U.S. continues to hype the lab leak theory,” the Chinese foreign ministry said in a report. “Is it actually concerned about tracing the source or trying to divert attention?” the spokesperson questioned.