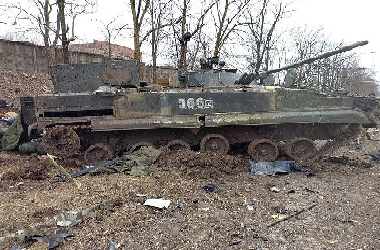 Nearly three months after the misadventure of Russia into Ukraine by invasion, we are yet to see an end to this war in sight.

Meanwhile, the wanton killing of people and the destruction of properties continue unabated.

This unnecessary cost caused by one man to another country in the 21st century should never be allowed, but it has come about based on one thing, and one thing only — nuclear weapons.

The World is in dread of a nuclear war, so countries with this type of weapon wield power and control to the extent that other countries are at their mercy.

The frightening thing about this scenario is that not one African country or country made up of people of predominantly African descent boasts such a weapon.

The fact of the matter is the World should not stand idly by and allow one man or one country to dominate another or govern its people through exploitation and brutality.

However, we see that happening time and again in countries such as Ethiopia, Yemen, Syria, and Sudan, among many others.

Until the World unites against the atrocities committed by leaders who seek to impose their will on other countries or their own people brutally, we will be forever consenting to evil by neglect.

Now, we see the U.S. and NATO countries pulling out all the stops to help Ukraine, and so it should, but the truth is that type of help should also be extended to other countries in times of crisis.

More and more, developing countries have come to recognize the hypocrisy played by the developed countries and see themselves as being used as pawns to suit the interest of powerful nations.

For example, the U.S. is about to pump nearly $50 billion into Ukraine, yet its foreign aid to Latin America and the Caribbean over the last sixteen years has averaged $3 billion annually.

The aid package to Ukraine is reportedly said to be more than the total amount of money in all, but 13 countries in the World spend on their military.

Now, of course, everyone recognizes that budgets reflect priorities, and it suggests that these countries, which the U.S. claimed as being under its sphere of influence, are low down the totem pole.

The quote from the scriptures, “These people come near to me with their mouth and honor me with their lips, but their hearts are far from me,” is apt and comes readily to mind.

Is it any wonder one sees people swarming the U.S. border and more countries aligning themselves with China?

The top U.S. intelligence official has already told lawmakers that Vladimir Putin intends to expand the offensive beyond the eastern Donbas region.

According to the Director of National Intelligence Avril Haines, Russia’s refocus on Donbas after failing to capture the Ukrainian capital of Kyiv was likely “only a temporary shift,” and she posited that “Putin’s strategic goals have probably not changed.”

“The uncertain nature of the battle, which is developing into a war of attrition, combined with the reality that Putin faces a mismatch between his ambitions and Russia’s current conventional military capabilities likely means the next few months could see us moving along a more unpredictable and potentially escalatory trajectory,” Haines testified. “At the very least, we believe the dichotomy will usher in a period of more ad hoc decision making in Russia.”

This situation could lead to a long-drawn-out war, and with the Pentagon posturing a strategic weakening or defeat of Russia, any game can play. The chain effect will continue to be a damaging one internationally.

The truth is the second-largest powerful country on earth — China, should also join with the U.S. and its allies to help stop the war rather than sitting back and playing the three blind mice — see no evil, hear no evil, and speak no evil.

Again, it is when countries join and unite together to root out the forces of evil, one will see humanity evolve to a higher level.

But I wouldn’t hold my breath, would you?