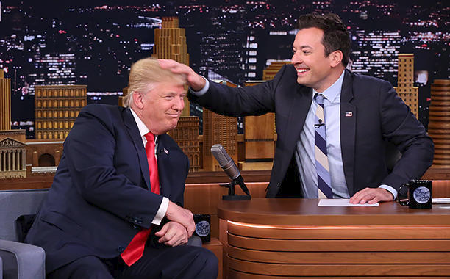 The Donald put social media into overdrive and head spin in his appearance on Jimmy Fallon’s The Tonight Show, a week ago.

Trump, the showman extraordinaire knows a steal when he sees one and was not going to let the opportunity afforded him passed easily, even if it’s at the expense of being seen as a court jester.

So it all started with the host Fallon posing the question: “Can I mess your hair up?”

Had Jimmy Fallon directed the question toward anyone else on this September night on The Tonight Show, it wouldn’t have been a big deal. But it wasn’t anyone else; it was Donald J. Trump.

So, following a little jive between both men, the GOP candidate yielded to Fallon’s request.

“The answer is yes,” said Trump, “but the people in New Hampshire, where I’m going to be in about an hour from now, I hope they’re going to understand.”

And, thus, the internet went wild immediately after, with many criticizing Fallon for failing to ask the tough questions.

However, it was indeed Trump’s “charm moment” and it proved magical.