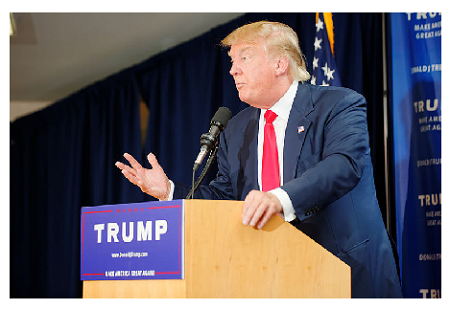 Trump continues with his rounds on the campaign trail, and it’s difficult to say who loves it more; Trump or the public.

However, there is one thing for sure the crowd can’t seem to get enough of him.

On his trip to New Hampshire, the crowd greeted him as if he was a rock star come to town.

He boasted to them that he’d make a smarter president than any of his competitors when it comes to the economy, the military, and everything else.

“We will make great trade deals, we will save Social Security without cuts, we will come up with health care plans that will be phenomenal — phenomenal,” Trump told a packed high school auditorium.

Although there has been much chatter about Trump’s “straight talk” and his rambunctiousness on the campaign trail, his poll numbers continue to be way ahead of his fellow Republican contenders.

“He’s a breath of fresh air that’s deviating from the traditional political talk and focusing on things that I think many Americans want to hear,” a member of the public reportedly told a media outlet.

On his trip to Iowa where all political contenders vying for the White House must go to pay homage, Trump vowed that he would spend as much as $1 billion of his own money to defeat Hillary Clinton in the general election, if push comes to shove.

“My crowd is 10 times Hillary’s,” Trump boasted when told the Democratic frontrunner was also campaigning in town.

At a press conference where members of the press gathered, Trump repeated his tag line of making the country “great” and ignored questions about his policy positions, telling reporters that they were far more concerned about the details than voters are.

He also posited that Jeb Bush, by virtue of his $120 million campaign warchest, would be beholden to his donors.

He spent over twenty minutes brushing off questions put to him by the press.

On Immigration reform? Build a wall! “Trump can build walls,” he said.

Working with Congress? “I’ve gotten Congress to do whatever I want my whole life.”

Allowing abortions in cases of rape and incest? “Yes. I’ve always had the exceptions.”

So far, Trump has yet to release specific policies on any of the subjects he touts on the campaign trail.

He reportedly said his campaign is in the process of crafting policies and will likely release details in September.

Basking in his high poll numbers, listening to loud applause and sustained cheers from the crowd, Trump is apparently on cloud nine.

Rightly so, he is the GOP’s hottest candidate.

“You know,” Trump told the crowd. “They’re calling it the summer of Trump.”