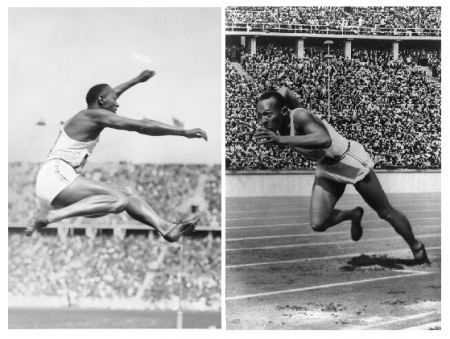 The 2012 Summer Olympics is over, and maybe forgotten but can we forget the incredible achievements of one of the most famous Olympic gold medal winners — James Cleveland “Jesse” Owens (September 12, 1913 – March 31, 1980)?

More than 77 years after Jesse Owens, the son of a sharecropper and grandson of a slave, competed at the 1936 Summer Olympics in Berlin, he is still considered a national hero.

Not only was he the first person to win four gold medals at one time in Olympic track history, Owens accomplished this feat in front of Germany’s Nazi dictator, Adolf Hitler, who was proclaiming the superiority of the Aryan race to the world.

Almost overnight, the African-American track and field athlete from Cleveland, Ohio became an international celebrity for putting a chink in Hitler’s propaganda machine.

Unsurprisingly, even before he competed at the Olympics, he had already broken 3 world records and tied for a fourth, earning the well-deserved nickname “The Buckeye Bullet”.