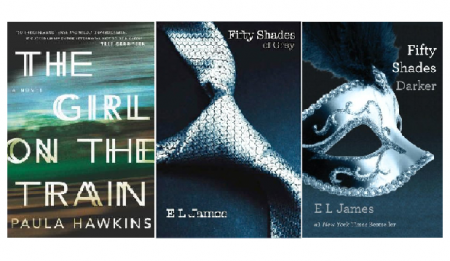 The nytimes.com has listed the following among its combined print and e-book fiction best sellers for the week.

What’s on your list? Do you own or have you read any of the books listed below?

1. THE GIRL ON THE TRAIN, by Paula Hawkins. (Riverhead.)

A psychological thriller set in London is full of complications and betrayals.

An innocent college student falls in love with a tortured man with particular sexual tastes; the first of a trilogy.

Daunted by Christian’s dark secrets, Anastasia ends their relationship — but desire still dominates her every thought; the second book in a trilogy.

Reunited, Anastasia and Christian face a world of possibilities, and unexpected challenges; the final volume in a trilogy.

5. ALL THE LIGHT WE CANNOT SEE, by Anthony Doerr. (Scribner.)

The lives of a blind French girl and a gadget-obsessed German boy before and during World War II.

A woman disappears on the day of her fifth anniversary; is her husband a killer?

Two sisters are separated in World War II France: one struggling to survive in the countryside, the other joining the Resistance in Paris.

The three “Fifty Shades” novels in one bundle.

Four generations of a family are drawn to a house in the Baltimore suburbs.

A murderer is obsessed with Lt. Eve Dallas; by Nora Roberts, writing pseudonymously.