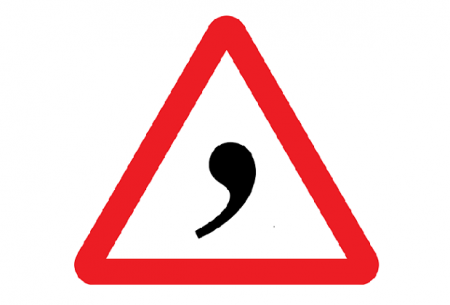 Punctuation marks are said to be traffic signals of clear writing. They tell the reader where to stop, slow down, take a detour, prevent collisions, among others.

However, of all the punctuation marks, the one that is said to be a bit of an enigma is the comma. This is partly because the rules governing other punctuation marks are easier to define and understand.

One of the most frequent punctuation errors is the over-use of the comma and as one writer puts it, some people tend to go comma crazy or comma-kaze with their use of the comma.

That said, here are five useful guidelines and rules governing the use of comma:

1. Use commas to separate independent clauses when they are joined by any of these seven coordinating conjunctions: and, but, for, or, nor, so, yet.

The class was over, but the students refused to leave.

She said she would be late, yet she arrived on time.

I want to reach school on time, so I woke up early.

2. Use commas after introductory a) clauses, b) phrases, or c) words that come before the main clause.

a. Common starter words for introductory clauses that should be followed by a comma include after, although, as, because, if, since, when, while.

While I was singing, the boy slammed the door.

Because she was sick, she did not attend class.

If you walk in the rain, you will get sick.

When she comes home, we’ll bake the birthday cake.

However, don’t put a comma after the main clause when a dependent (subordinate) clause follows it (except for cases of extreme contrast).

INCORRECT: The boy slammed the door, while I was singing.

3. Use commas to separate three or more words, phrases, or clauses written in a series.

Please put the cups, jars, and plates on the shelf.

The party promised to focus on education, protect the environment, reduce crime, and end unemployment.

I really don’t care whom you see, where you go, or what you do.

She was a beautiful, smart girl. (coordinate)

They lived on a large estate. (non-coordinate)

5. Use a comma near the end of a sentence to separate contrasted coordinate elements or to indicate a distinct pause or shift.

You’re a member of the Marketing Club, aren’t you?

The girl seemed innocent, even gullible.