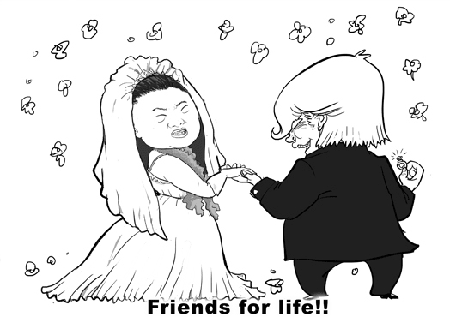 In the pursuit of obtaining a win, President Trump is seeking to pull out all the stops to ensure that he reaches a deal with North Korean leader Kim Jong-Un.

A win for the President will make him look larger than life and to use his own words — this would be huge!

The meeting is set for June 12 and is scheduled to take place in Singapore. It is dubbed as a historic, high-stakes summit aimed at having North Korea giving up its nuclear weapons program.

The President has the full support of Republican lawmakers with House Speaker Paul D. Ryan (R-Wis.) asking for the president to be given “some leeway” in his management of the summit process.

Ryan’s appeal has been underscored by Senate Majority Leader Mitch McConnell (R-Ky.) who has declared that administration after administration has failed to reach this far in their dealings with North Korea, and President Trump should be given kudos for the current undertaking.

“We’ve watched administrations of both parties not being able to achieve what we had all hoped for in North Korea, and that is a peninsula without nuclear weapons.”

He said further, “This is as close as we’ve ever come. I think everybody’s a little bit cautious in dealing with the North Koreans for all the obvious reasons, but this is quite significant. We’ve gotten this far, and the president deserves all the credit for getting them in a different position.”

Already, people are calling for Trump to be awarded the Nobel Peace Prize, and the President is basking in the announcement of the meeting.

“We will both try to make it a very special moment for World Peace!” Trump wrote in his tweet.

At a rally a few weeks ago in Elkhart, Ind., Trump called the relationship with Pyongyang “good” and berated those in the media who had criticized his strategy as too risky.

Trump posited the view that the summit will be a “big success.” But he added that “my attitude is, if it isn’t, it isn’t,” suggesting that he would accept the outcome if there was no deal to be made.

The fact of the matter is if Trump fails to get the deal he is aiming for one could easily see Trump throwing a temper tantrum and blowing up North Korea to show strength and avoid losing face.

And that my friend is what is at stake – by any means necessary North Korea must bow or else!