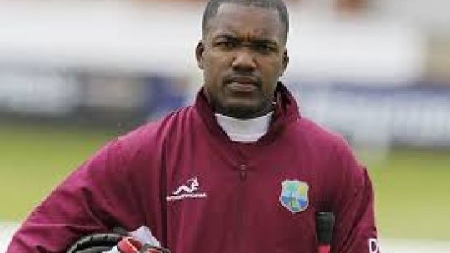 Darren Michael Bravo, the young Windies left-handed batting star will remain a bystander and observer when the West Indies match their cricket prowess against Zimbabwe later this month.

Cricket West Indies has named an unchanged squad on Tuesday for their two-test tour of Zimbabwe later this month, and Bravo is not among the players named.

Bravo has not represented the Windies since being sent home from the tri-nation tour of Zimbabwe last year after a run-in with Dave Cameron, President of West Indies Cricket Board.

Bravo declined to be considered for Windies One Day International against England last month.

According to the chairman of selectors Courtney Browne, Darren Bravo said then he was not available for selection.

The Windies will, therefore, continue to bet their batting hopes on Shai Hope and Kraigg Brathwaite who both scored centuries in the recent 3-test tour of England which the Caribbean side lost 2-1.

Jason Holder continues to lead the side with Brathwaite as his deputy.

The first test match is set for October 21-25 while the second test is scheduled to take place between October 29  to November 2.

Both games are set to be played at the Queen’s Sports Club in Bulawayo.

West Indies will be making this their second tour of Zimbabwe in the last 12 months.

They played in Zimbabwe in a tri-series which also involved Sri Lanka in November last year.

In announcing the squad to tour Zimbabwe, Courtney Browne, chairman of the CWI selection panel, said: “The selection panel is pleased to announce the same Test squad that toured England to visit Zimbabwe.”

The chairman further noted, “The dedication, commitment, and focus in their preparation and during the series in England showed immense character for such a young team in very difficult conditions against World-class competition.”

He also said, “The lessons learned on that tour augurs well for the individual players and the team’s continued development as a whole, and we wish them well on the Tour of Zimbabwe.”