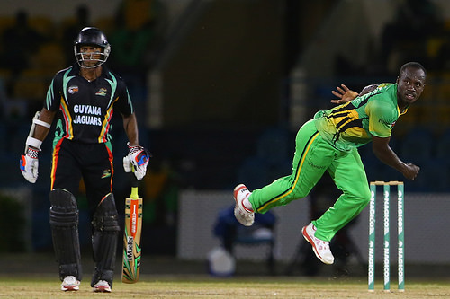 The Jamaican cricket team is currently going through a transition with several young talents seeking to make names for themselves.After winning the regional Four-Day competition for five years in a row from 2008 to 2012, Jamaica has gone for five years without additional success.

In this period, several experienced players have left the team including the former inspirational captains — Tamar Lambert, Wavell Hinds and David Bernard Jr.

Now, there is a new group of players task with the responsibility of bringing Jamaican cricket to another level, and one of these players is Derval Green.

Derval Green is an all-rounder, he bats in the middle order and bowls lively medium pace.

He came through the ranks, playing as an under-19 cricketer for Jamaica and captained the team to victory in the regional 50-over competition in 2007.

Green, however, did not transition to the national senior squad immediately as was expected and he explains that a major reason for this was because he decided to stay in Westmoreland and play for his boyhood team in the parish.

He eventually recognized that there was no real structure in cricket in the rural parish, which resulted in naturally talented cricketers like himself not getting enough opportunity to train well and grow as cricketers, this resulted in him making a move to GC Foster College in 2009.

GC Foster, according to Green was a much better cricketing environment, with excellent training facilities and a physiotherapist to help with fitness. He believes that he has grown as a Cricketer by being a part of the GC Foster set-up.

He was the joint leading wicket-taker for Jamaica in the competition with his six wickets. He has also played 8 First Class matches, taking 15 wickets at an average of 31.26 and has made one 197 runs while batting at an average of 13.13.

Green can develop into a useful Cricketer for Jamaica if he gets the opportunity to play cricket matches consistently at the First-Class level, he is a very composed batsman with a proper technique and bowls with decent pace and intelligence.

The Jamaican cricketing team needs a good all-rounder to replace the effervescent David Bernard Jr who has served the team in this capacity for more than 15 years, Greene is a similar type of player to Bernard and thinks that he can develop in this role for the team.

Green is also a natural leader. He captained the St. Elizabeth Technical High School and Jamaica under-19 cricket teams in his youth days and had also led at the Senior Cup level, his leadership qualities will serve the young Jamaican team well, and if he manages to maintain a place in the team, a leadership role might not be far away.

Cricket fans will no doubt be monitoring his progress in the ongoing four days Regional Competition to see whether or not this exciting young cricketer will live up to his natural talent if he does the Jamaican cricket team would be better and stronger for it.