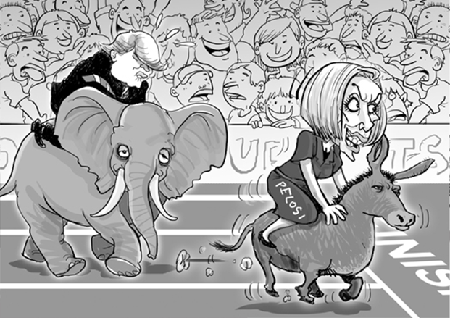 The Democrats rush to a second round of call to have President Trump removed from office may play right into his 2020 reelection game plan.

First, the Democrats were not able to gain any traction from the electorate for the impeachment of the President after nearly a two-year investigation by special counsel Robert Mueller.

The background to that investigation was Russia’s interference of the 2016 election and suspicious links between Trump associates and Russian officials.

Although the probe cast a dark shadow over Donald Trump’s presidency, there was no indictment against him.

Today, Trump’s mantra still rings true to a large part of the electorate, “No, obstruction. No collusion.”

Now, the second call by the Democrats for the President’s removal from office stems from a whistleblower complaint.

The report alleged that President Donald Trump abused his official powers “to solicit interference” from Ukraine in the upcoming 2020 election.

Additionally, there is the charge that steps were taken by the White House administration to cover up the President’s misdeeds.

This latest uproar, however, is not only creating a media frenzy but also is a major distraction from addressing some of the pressing problems facing the electorate.

Yes, one is not arguing that the President should not be held accountable for his bad behavior, but the impeachment overreach by the Democrats is all white noise.

The truth is the Republican majority held Senate would not vote for the removal of President Trump from office.

This position is evidenced by the utterances from their leadership — “Let Trump be Trump” and “Trump is a different kind of President.”

Moreover, the Republicans see Trump as their best hope of keeping the White House and ultimately win them power.

The fact is the whistleblower case makes the Democratic Party looks weak and desperate, and their call for impeachment is fast becoming like the story of “the boy who cried wolf.”

So, it begs the question, what should the Democrats do?

One could argue that the path of censure would provide the Democrats with better ammunition to confront the President in the 2020 election, or better yet beat Trump at the polls which is due next year.

The fact is the time-consuming approach of impeachment will be dead on arrival before the Republican majority led Senate.

Moreover, the route of impeachment is bound to suck up all the oxygen that could be better used for strategic planning and establishing a people’s agenda by the Democrats for the 2020 election.

After all, U.S. politics have never been church or picnic-like. Trump’s behavior has only made it look demonstrable a little more devilish.

The truth is, over the years, Presidents have collected dirt nationally and internationally on other leaders or countries and use it to advance their cause, show power and strengths as well as to gain the upper hand in negotiations.

Some victims of the collected dirt, of course, will call it “international piracy,” while others “economic terrorism,” but unfortunately, they cannot call for impeachment.

The fact is the quid pro quo game has always been played in politics, and in Trump, one could say, there is no guile.

Ah, well, “O, what a tangled web we weave when first we practice to deceive!”