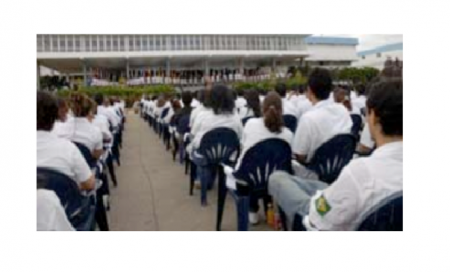 A Boost To The Medical System Throughout The Region

Over the years, Cuba’s medical training has come under scrutiny for one reason or another, yet the program still remains one of the best value for money.

The country has 25 medical schools, all public, and a Latin American School of Medicine Study in which there are students from over 100 foreign countries.

As in most countries, the duration of medical school training in Cuba is a minimum of six years full-time study. The program requires rigorous study and only students with high grades are accepted into medical school.

According to a report from the Latina American news agency – Prensa Latina, a total of 3,575 professionals, of which 652 are foreigners, graduated earlier this month from Santiago de Cuba Medical University.

The graduates include doctors, dentists, nurses, health technicians and psychologists. These graduates will join the thousands of professionals who have graduated from the institution of 51 years history.

Most of the foreign graduates were from Bolivia, 410, followed by Jamaica, 68, Venezuela 61, and Haiti with 59.

The graduation ceremony, though lacking the pomp and circumstance that is typical of schools in other countries, was resplendent with enthralling oral and cultural presentations.

The event was attended by college professors and officials as well as the ambassadors from Ecuador, Edgar Ponce Inturriaga; Bolivia, Palmiro Sonia and Argentina, Juliana Marino.