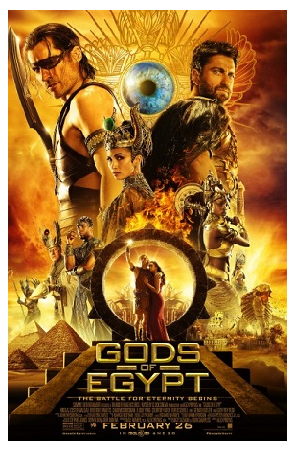 Butler plays the god of darkness Set who takes over the Egyptian empire, and Thwaites plays the mortal hero Bek who partners with the god Horus, played by Coster-Waldau, to save the world and rescue his love.

This movie is mired in controversy, and its critics are having a field day in taking it apart not only because of the lack of diversity in its casting but also its writing and visual effect.

The mostly white characters playing Egyptians are viewed as an attempt at whitewashing or race bending. The angst is Gods of Egypt is supposed to be an African story, yet it’s being viewed through the lens of whites.

The film’s director Alex Proyas took responsibility by saying: “… It is clear that our casting choices should’ve been more diverse. I sincerely apologize to those who are offended by the decisions we made.”

“We recognize that it is our responsibility to help ensure that casting decisions reflect the diversity and culture of the time periods portrayed. In this instance, we failed to live up to our own standards of sensitivity and diversity for which we sincerely apologize. Lionsgate is deeply committed to making films that reflect the diversity of our audiences. We have, can and will continue to do better.”

Notwithstanding, critics took the production company to task for its insensitivity.

On Rotten Tomatoes, the film has a rating of 13%, based on 102 reviews, with an average rating of 3.4/10. Metacritic gives the film a score of 23 out of 100, based on 24 critics, indicating “generally unfavorable reviews”.

This is by any measure a dreadful movie, a chintzy, CG-encrusted eyesore that oozes stupidity and self-indulgence from every pore. Full review

If Gods of Egypt were any worse, it might be a masterpiece. Full review

Alonso Duralde of TheWrap wrote, “A mishmash of unconvincing visual effects and clumsy writing — not to mention another depiction of ancient Egypt in which the lead roles are almost all played by white folks — Gods of Egypt might have merited a so-bad-it’s-good schadenfreude fanbase had it maintained the unintentional laughs of its first 10 minutes. Instead, it skids into dullness, thus negating the camp classic that it so often verges on becoming.”