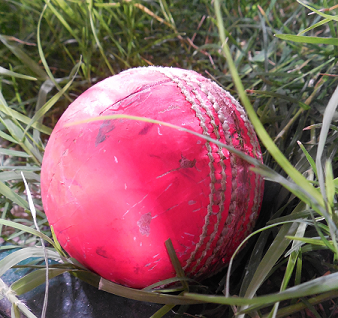 The color pink is said to represent love, beauty, youth, femininity, and charm.

Moreover, when combined with black or violet it is associated with eroticism and seduction.

In Nazi Germany in the 1930s and 1940s, inmates of Nazi concentration camps who were accused of homosexuality were forced to wear a pink triangle.

In fact, this has led to the pink triangle being used today as a symbol of the modern gay rights movement.

The fact is pink, over the years has come to symbolize different things in art, politics, literature, and fashion, among various other facets of life.

Today, some popular expressions one will come across are, “pink condition,” “seeing pink elephants” “tickled pink” and “pink slip.”

Now, the colors of cricket balls have over time evolved to include red, white yellow, orange, and pink.

The pink balls were first developed in the 2000s to enable test and first-class matches to be played at night.

It was used for the first time in July 2009 in an international one-day match between Australia and the England’s women’s cricket team.

Since then, it has been used in a few other day-night test matches.

However, the introduction of the pink ball has generated different reactions from players.

For example, Mitchell Starc noted,”It’s definitely not a red ball.”

“It doesn’t react anything like the red ball, in terms of swing and the hardness of it anyway. It goes soft pretty quickly, I didn’t see a huge amount of reverse swing in that game and I don’t think it swung from memory too much until the artificial light took over. It definitely reacts very, very differently to the red ball,” he added.

Mitchell Johnson contended that tradition in the game is very important.

He said, “One thing is I love the tradition of Test cricket, things like the Baggy Green and little things like wearing the woolen jumper. We had an option to change that but we wanted to keep that as a tradition. I think tradition in the game is very important.”

“There wasn’t much pink left on it by the end of the game,” Adam Voges told the press after a match.

The truth is cricket must adapt to the new demands and preferences of the marketplace. If not, it will certainly become a relic of the past.

So, the move to make day-night test matches part of the cricket entertainment package necessitates the introduction of the pink ball.

Although not readily accepted by some players and administrators, cricket fans are showing strong support for the day-night test cricket schedule and the use of the pink ball is the best compromise to date.

The introductions of the foregoing formats were also met with strong resistance by some people but have now become a fixture on the cricket calendar.

Despite the current resistance, one has no doubt that over time, day-night test matches and the use of the pink ball will become par for the course.