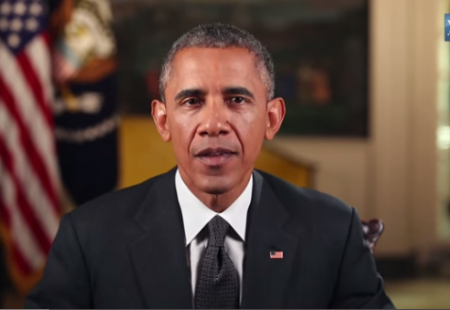 “Everything we’ve done over the past six years has been in pursuit of one overarching goal: creating opportunity for all,” said the President at the start of his weekly address.

He noted that it has long been understood that some communities have consistently had the odds stacked against them. He posited that this was true of rural communities with chronic poverty, manufacturing communities that suffered after the plants they depended on closed their doors, and  some suburbs and inner cities, where jobs can be hard to find and harder to get to.

He explained that this sense of unfairness and powerlessness has helped to fuel the kind of unrest that has seen in places like Baltimore, Ferguson, and New York.

“It has many causes — from a basic lack of opportunity to groups feeling unfairly targeted by police – which means there’s no single solution. But there are many that could make a different and could help. And we have to do everything in our power to make this country’s promise real for everyone willing to work for it,” said the President.

He further explained that he has met recently at a summit organized by Catholics and evangelicals and sat down with a conservative scholar and poverty expert to discuss and explore ways in which more opportunities could be created for more people.

He said, “We know our efforts matter: since 1967, we’ve brought poverty down by about 40 percent, thanks in part to programs like Social Security and the Earned Income Tax Credit for working families. And we know that there are folks from all faiths, and across the ideological spectrum, who care deeply about “the least of these.”

He noted that it’s not words, but deeds, that will make a difference. Furthermore, he declared that his administration is making a difference from expanding tax cuts for working parents, to raising high school graduation rates, to helping millions of Americans secure health insurance when they didn’t have it just a few years ago.

The President argued that lack of opportunity is not the only barrier between too many of the young people within our society and the kind of future they deserve as there are many other issues that continue to plague the society.

“Whether we are Democrats, Republicans, or independents; whether we live in one of our poorest communities, one of our wealthiest, or anywhere in between, we all want our country to be one where hard work pays off and responsibility is rewarded. We want a place where you can make it if you try. That’s the promise we make to our young people. That’s the promise that makes us exceptional. And it’s the promise I’ll never stop fighting to keep, for my children and for yours,” concluded the President.