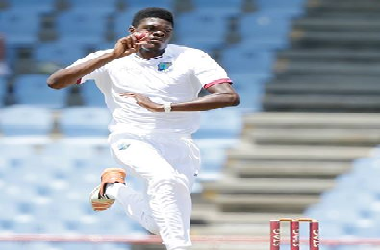 Estwick, the 59-year-old coach and brother of former Windies fast bowler Sylvester Clark, has been around Windies set up for several years, so his desire to see the bowlers performing well on this New Zealand tour is quite apt.

However, truth be told, over the past few years, the bowlers have been ‘a knight in shining armor’ for Windies at home and abroad — time for the batters to step up!

That said, Coach Estwick apparently thinks that young fast bowler Alzarri Joseph is the trump card for the Windies on this tour.

Joseph, the Antiguan born 23-year-old who will celebrate his next birthday on November 20, was a Windies under-19 stand out bowler.

In December 2015, he was named in the West Indies squad for the 2016 Under-19 World Cup. He took 13 wickets from six matches to finish at the tournament as his team’s leading wicket-taker (and equal third overall).

His best performance was 4/30 against Zimbabwe, which saw him named man of the match.

He made his first-class debut for the Leewards during the 2014–15 Regional Four Day Competition.

Against Guyana during the following season, he took a maiden first-class five-wicket haul, 5/99 opening the bowling with Gavin Tonge — another young fast bowler that has disappeared from the scene like so many other young Caribbean players with excellent prospects.

In the next match against the Windward Islands, he took another five-wicket haul, 7/46.

Joseph’s performances launched him into the West Indies Test team in August 2016 against India. He also made his One Day International (ODI) debut for the West Indies against Pakistan on October 2, 2016.

The young fast bowler has had his bout with injuries and has not been as consistent as anticipated.

On the Windies tour of England earlier this year, he struggled and could only manage to pick up three wickets in the first two Tests.  He was dropped for spinner Rahkeem Cornwall for the third and final match.

Estwick opined in a media briefing that he expects Joseph to shine on this tour.

“I have high expectations of Alzarri Joseph for this tour.  He has been around for a while, and I’ve been trying to get him to realize that it’s time now that he really stands up and puts in big performances,” said Estwick.

He also pointed to bowlers such as Shannon Gabriel, Jason Holder, and Kemar Roach that he expects to carry the weight of the team.

“Those four will be very important to us, as you know the pitches in New Zealand are not spin-friendly. So, the spinners might have to play more of a containing role while the fast bowlers are the key wicket-takers,” he added.

Joseph, since making his debut against India in 2016 has claimed 28 wickets in 11 matches with best figures of 4 for 50.