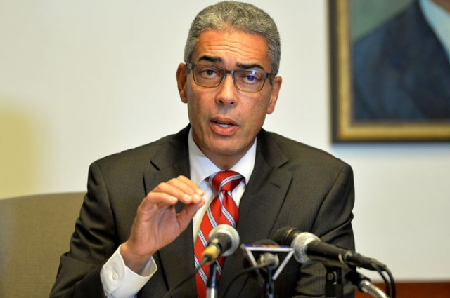 Jamaica has exceeded all macroeconomic targets for the 14th and final quarterly test under the Extended Fund Facility (EFF) with the International Monetary Fund (IMF).

Co-chair of the Economic Programme Oversight Committee (EPOC) Richard Byles, addressing a press briefing at the Sagicor offices in New Kingston yesterday, said he believes Jamaica will easily pass the test in all the quantitative performance criteria.

“This is not just a pass, but a very big pass for Jamaica for this 14th quarterly test,” Byles said.

He noted that for the quarter ending September, the Net International Reserves (NIR) stood at US$2.47 billion, exceeding the target by more than US$600 million. The country also surpassed the primary surplus target by some $21 billion to achieve a primary balance of $53.6 billion.

The EPOC co-chair said Jamaica also outperformed targets for taxes and grants to record approximately $235 billion for the first six months of the fiscal year. This exceeded the target by some $13 billion. This is 11.6 percent above the figures for the similar period last year.

“This is a trend we have noticed for quite a while, and I think the (tax collection) authorities should be congratulated for that. It also reflects a strengthening economy that the taxes [are performing well], particularly company taxes, which is based on profits; and PAYE, which means people are employed formally,” Byles said.

Meanwhile, the country spent $6.4 billion less than the target to record an expenditure of $253 billion for the April to September period.

The Statistical Institute of Jamaica has reported that inflation for September stood at 0.5 percent, a slight increase from the 0.4 percent recorded in August.

For the calendar year to date, inflation was 0.8 per cent and 1.9 per cent for the trailing 12 months.

“This is below two per cent for the last 12 months, which is a really extraordinary experience for us in Jamaica, where we are accustomed to have, if not double-digit, high single-digit inflation,” Byles said.