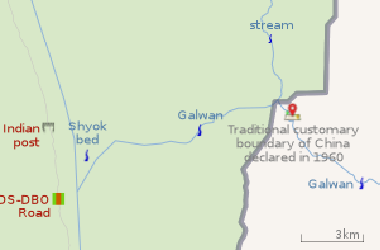 The worst violence on the India-China border since 1967 claimed the lives of 20 Indian soldiers. The clash occurred in the Galwan Valley, which has not been a site of conflict since 1962.

Following the recent aftermath, the Chinese Foreign Ministry in a statement claimed that the entire valley is located “on the Chinese side of the Line of Actual Control (LAC), which followed a statement from the People’s Liberation Army stating that “China always owns sovereignty over the Galwan Valley region.”

Meanwhile, India has described the claims as “exaggerated and untenable.”

Chinese Foreign Ministry spokesman Zhao Lijian accused India of violating the agreement the two countries had reached on June 6 regarding the LAC, calling it a “deliberate provocation” on New Delhi’s part.

He said that “the rights and wrongs … are very clear and the responsibility rests entirely with the Indian side”.

Zhao, in a series of tweets, said the Indians had unilaterally built roads, bridges, and other facilities in the region since April.

Indian and Chinese troops have been at loggerheads at several points on their 3,500km (2,200-mile) border, most of which have no clear line of demarcation.