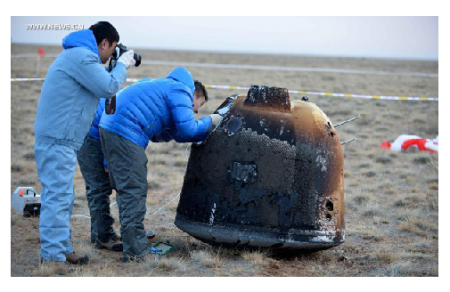 According to chinadaily.com.cn, China succeeded Saturday in the world’s first mission to the Moon and back in some 40 years, becoming the third nation to do so after the former Soviet Union and the United States.

The report states that search teams have already recovered the orbiter at the designated landing area, about 500 kilometers away from Beijing.

It also noted that the last documented mission of this kind was by the Soviet Union in the 1970s.

Launched Friday last week, the orbiter traversed 840,000 kilometers on its eight-day mission that saw it round the far side of the Moon and take some incredible pictures of Earth and Moon together.

The re-entry process began at around 6:13 a.m. Saturday morning, with the orbiter approaching Earth at a velocity of about 11.2 kilometers per second.

The high speed led to hefty friction between the orbiter and air and high temperatures on the craft’s exterior, generating an ion sheath that cut off contact between ground command and the orbiter.