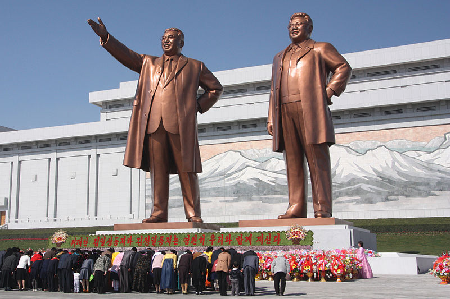 Japan learned from the bombings of Hiroshima and Nagasaki that the tragedy wrought by nuclear weapons must never be repeated and that humanity and nuclear weapons cannot coexist.

North Korean history began with the partition of Korea at the end of World War II in 1945. This also marked the creation of the Communist-aligned Democratic People’s Republic of Korea (DPRK) led by the former guerrilla leader, Kim Il-sung.

Il-sung governed North Korea for 46 years from its establishment in 1948 until his death in 1994.

The Kims have not only been a thorn in the side of its immediate neighbors South Korea and Japan but also by extension the leader of the free world, the United States.

North Korea, with a force estimated to be over 1 million active and 8 million reserve and paramilitary troops, is no ordinary military enterprise. In fact, the country is said to have the largest military institution in the world.

According to press reports, about 20 percent of men aged 17–54 serve in the regular armed forces, and approximately one in every 25 citizens is an enlisted soldier.

The Kims, over the years, have entrenched their leadership position through the command of the KPA and consequently placed a stranglehold on the country for close to 70 years.

Now, since the late 1970s, North Korea has been in the process of building its military hardware including ballistic missiles and the development of nuclear weapons.

The country has been tempting fate in starting an outright war by virtue of its extended test-fires of missiles across its borders with the latest being the fire of a ballistic missile directly into Japanese-controlled waters. Apart from this, the country has had several skirmishes with the South Korean army.

Recently, the country has up the ante in its fifth and reportedly biggest nuclear test which has forced world leaders to condemn the act and also prompted a U.N. Security Council meeting to discuss the issue.

However, short of going to war, world leaders seem clueless and helpless on how to punish North Korea for its wayward behavior. China’s support for North Korea also adds to world leaders’ dilemma.

That said, China’s position may be one of the only few draw cards the world community has in forcing Pyongyang to give up its nuclear ambition.

Now, the world waits with bated breath — how will China react?