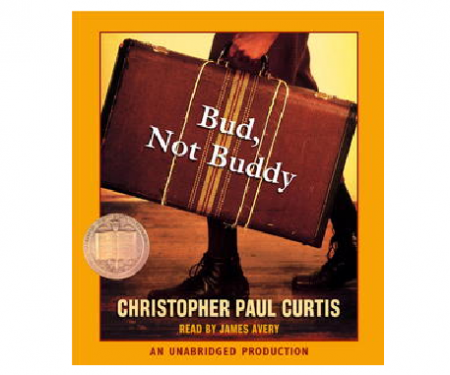 Writing on dallaslibrary2.org blog, Teresa Bocanegra, in her review of the book titled, “Bud, Not Buddy” by Christopher Paul Curtis, gives an interesting and revealing take on the foregoing title.

The story of Bud, Not Buddy takes place during the Great Depression. We come to know and love the tenacious ten-year-old Bud for his strength of character, his humor, and his determination to find his true place in the world no matter the obstacle. Bud’s mother died when he was younger, and after years of orphanages and unhappy foster-family situations, Bud sets out on his own in search of the man he believes to be his father.  His only clue is a flyer left behind by his mother featuring a jazz musician Herman E. Calloway.  Bud feels in his heart that this is the man he must find.

Bud takes a few things along with him.  Within a beat-up, broken down suitcase (that he is ever vigilant of) Bud carries his entire life and treasure; the musician flyer, his blanket, a picture of his mom, and other indispensable tokens of his life.  He also carries a set of life-rules he devised throughout his years as an orphan.  “Bud Caldwell’s Rules and Things for Having a Funner Life and Making a Better Liar Out of Yourself.” Bud refers to these hilarious rules throughout the book when he finds himself in the applicable situation. For example, Rules and Things Number 83: “If a adult tells you not to worry, and you weren’t worried before, you better hurry up and start ’cause you’re already running late.” Or Rules and Things Number 16: “If a grown-up ever starts a sentence by saying, ‘Haven’t you heard,’ get ready, ’cause what’s about to come out of their mouth is gonna drop you headfirst into a boiling tragedy.”

Though there is a lot of laugh-out-loud humor as Bud’s journey unfolds, he often struggles to find a place to sleep or eat.  It is his character that pulls him through, along with the aid and kindness of strangers along the way – though these strangers are suffering economically during the Great Depression, they are always welcoming as Bud makes his way from one temporary pit-stop to the next.  Bud has ideas of jumping a train bound for California where he plans to get a job. That idea falls through but he makes his way through “Hooverville” and finds a friendly welcome – picking up more courage along the way. His imagination often runs wild (and gives readers laughs) in the dead of night, all alone and on his own when he thinks a vampire might be after him!

Bud reaches his destination and the jazz band becomes almost like a family for him, though for some reason they laugh at his story of Herman E. Calloway being his father.  Herman keeps his distance and Bud continues to push his case and present his arguments.  He knows that Herman must be his father. As the story winds up, Herman is faced with a heart-wrenching discovery, and Bud sees the pieces finally fit together. Bud’s quest has ended.