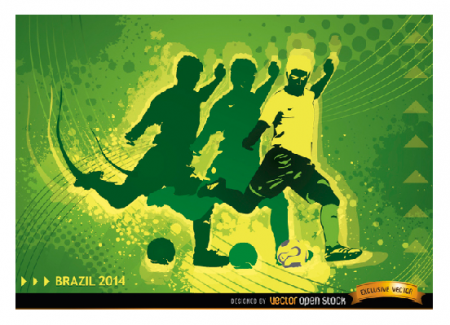 After what seems like a lifetime of waiting, the 2014 FIFA World Cup is finally upon us and the opening game sees hosts Brazil, take on Croatia on Thursday the 12th of June.  It´s expected that a billion people worldwide will tune in on TV to watch the first game, which will be preceded by a 25-minute opening ceremony featuring over 600 performance artists including acrobatic gymnasts, martial arts-style capoeira performers and stilt walkers. Whilst it´s bound to be an amazing spectacle, most of the 60,000 fans in attendance will be hoping that the opening ceremony is only the beginning of the “samba show” and that the main theatrics will come from the eleven performance artists wearing the yellow and blue of the host nation.

There is a huge expectation on the Brazilians to perform on home soil. They are the only of the World cup winning nations to have not won the tournament when hosting and they will be eager not to repeat the failure of 1950. They have a start studded team featuring huge stars from Europe and South America´s top teams such as Neymar, Fred, Ramires, Marcelo, Thiago and Hulk. Brazil are the most successful team in world football having won the competition five times and many of their former stars such as Pele, Romario, Ronaldo, Ronaldinho and Roberto Carlos inscribed their names into the footballing history books by saving their best performances for this, the biggest stage.

For that reason, they have been instilled as tournament favourites and this game itself is thought to be a straight forward win for Brazil but Croatia are very unpredictable and will be out to spoil the party. This will only be their 4th appearance at the finals and each performance previous tells us little about them. In 1998, they shocked a lot of people by finishing third in the tournament, beating Germany 3-0 in the process. They crashed out of the 2002 World Cup in the group stages and failed to qualify for the last World Cup in South Africa. In between that, they played in the Euros and gave an excellent account of themselves against both Spain and Italy, the eventual finalists. Like Brazil, they boast a team of quality in every area of the pitch with a wealth of experience.

Brazil as host nation was automatically awarded a place in the competition. They warmed up  with an amazing win in the Confederations cup, featuring an emphatic victory over current world champions Spain.

On the other hand, Croatia went the difficult route. They finished second in their group and qualified by beating Iceland over two legs. They have slipped to 20th in the Fifa rankings.

Luca Modric: If Croatia are to stand a chance of winning this match, much will depend on their ability to keep possession to stop the onslaught of Brazilian attacks. The Real Madrid pocket-sized midfielder is a maestro of ball retention and is capable of striking from distance.

Mateo Kovačić – the youngster should feature beside Modric in the centre of midfield for Croatia. He has had a successful breakthrough season and is highly thought of at Inter Milan. His technical ability and his nous for spotting a defense splitting pass will be key for Croatia.

Neymar: The expectations of a nation rest on the shoulders of the F.C Barcelona star. He has shown flashes of brilliance, but now needs to step up and prove he belongs in the same category as so many Brazilian legends before him.

Oscar: Another youngster with potential to light up the tournament. With most of the attention being focused on Neymar, there´s room for the attacking play maker to make his mark on the world stage.

Verdict: On paper, this seems like this should be a tight game which should result with a victory for  Brazil, who´s solid defence and wealth of attacking talent should prove too much for the Croats – however Croatia are unpredictable and are more than capable of standing up to, and beating the super-powers of World football.