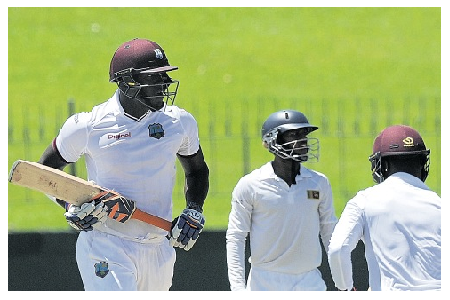 Resuming from their overnight 127 for six, West Indies were dismissed for 209 with the right-handed Brathwaite slamming 54 off 46 balls, batting at number 10.

Off-spinner Ruraj Randiv finished with five for 73, while seamer Sunranga Lakmal picked up three for 26.

In a torrid six-over period before lunch, right-armer Roach (2-25) then rocked the hosts with wickets off the first two balls of the innings without a run on the board before opener Udara Jayasundera and Minod Bhanuka stroked hundreds to guide their side to 233 for three at the close at the Sinhalese Sports Club.

Jayasundera, a 24-year-old left-hander, was unbeaten on 124 while Bhanuka, a 20-year-old wicketkeeper with just two first-class games to his name, hit 101.

West Indies was definitely on top when Roach claimed Kusal Mendis off the first ball of the innings, caught at point by Jermaine Blackwood.