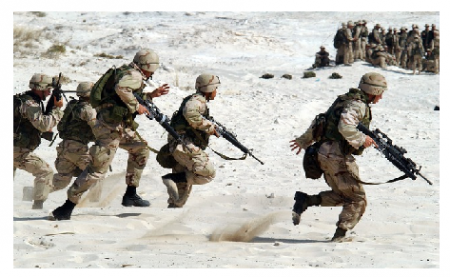 Boots on the ground is a phrase that has found its way in the American lexicon. Its usage is made popular not only by politicians, but also media outlets.

Now, although the phrase flies off the lips of some politicians easily, especially those who are referred to as war hawks, on the practical side, it is a deadly mission.

Why? Well, it involves deploying combat troops to fight on the ground in a foreign country which could lead to the death of thousands of soldiers. Today, in the U.S., the battle cry is for President Obama to send ground troops into the Middle East to obliterate ISIS and by extension take the fight to Syria, defeat the Syrian army, and remove Syria’s President.

Now, it is all well and good for politicians to shoot off the mouth because for many, they have nothing to lose, but for many other people, it’s the lives of friends, relatives, and loved ones at stake.

Consequently, the President is prudent enough to think through the consequences of sending U.S. army into battle without any known outcome or exit strategy.

The fact is the U.S. may easily defeat ISIS but what next? How does a “Christian” U.S. overrun a militant Muslim group as well as a Muslim country without any true allies in the Middle East, except for Israel?

The truth is currently what gives in the Middle East is a poisonous cocktail and the U.S. is being asked by people at home and abroad to drink it.

The good thing, however, President Obama though chomping at the bit has so far resisted rushing in where angels fear.

Yes, it may be argued that the U.S. should lead from the front. And this fits well with the saying, “to whom much is given, much is expected”, but the question must be asked, should the U.S. bear the cross alone and the world goes free?

That said, the Arab countries themselves have enough resources not only to take out ISIS but also to get rid of Syria’s strong man, President Bashar Hafez al-Assad. But will they do it? No, they will not as in the Christian West lies their savior.

So, as the vagaries of war continue in Iraq and Syria, some lawmakers in the U.S. have not only excoriated the President for his reluctance to put boots on the ground in the middle east, but also are currently lobbying to induce him to do so.

However, the same Congress showed no such interest or enthusiasm in passing the:

Raising of the debt ceiling

Moreover, earlier, Congress sounded the alarm that the U.S. has no money to take on a number of local infrastructure projects, yet they are quick to endorse more funding on top of the trillions already spent on war efforts overseas that may very well come back to bite them in the ass.