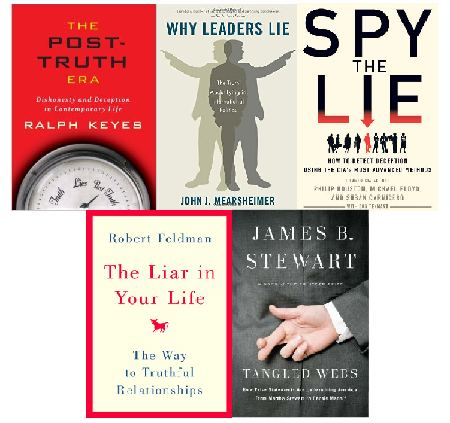 Pamela Meyer, a professional lie detector, is cited by Thu-Huang Ha as defining lying as a “cooperative act.”

“Think about it, a lie has no power whatsoever by its mere utterance. Its power emerges when someone else agrees to believe the lie.”

Ha also noted that Meyer works involve helping people see the sheer ubiquity of the falsehoods one tells and hear — and gives advice on how one might start to combat deception. Five of Meyer’s favorite books about truth, dishonesty, and all the gray areas in between are listed below based on a piece written by Ha on the popular website ideas.ted.com

“Keyes, who coined the term ‘post-truth era,’ argues that our modern society is awash in a type of lie that is neither truth nor fiction, but more akin to ‘casual dishonesty.’ An older book that is still relevant today and was way ahead of its time.”

“Lying and diplomacy — a match made in heaven.”

“Terrific real-world tips on ferreting out lies by three deception experts who worked on counterterrorism and criminal intelligence cases.”

“A great book from a University of Massachusetts psychology professor about how and why deception is eroding our culture. This deception expert authored the famous study that found strangers lie to each other about three times in the first ten minutes of meeting each other.”

“An investigative journalist delves deep into America’s most prominent lies and liars. Stewart focuses on many of the ‘greats,’ including Martha Stewart, Barry Bonds and Bernie Madoff.”