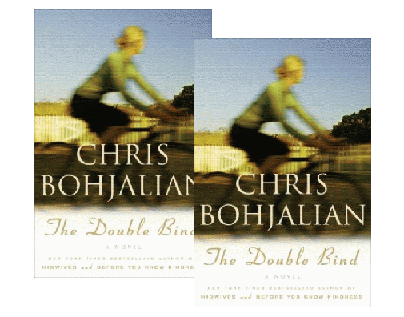 Victor Kralisz writing on the dallaslibrary2.org blog has an interesting take on the book entitled, “The Double Bind,” by Christopher A. Bohjalian.

“Double bind: A psychological predicament in which a person receives from a single source conflicting messages that allow no appropriate response to be made.” — Merriam Webster online.

“The Double bind occurs when the person cannot confront the inherent dilemma, and therefore can neither resolve it nor opt out of the situation.” –Wikipedia.

Chris Bohjalian’s narrator in this“spellbinding literary thriller” is Laurel Estabrook, a young social worker who has come into a collection of photographs left by a recently deceased client, Bobby Crocker.  He was apparently privy to the rich and famous in the ’40s through the ’70s but mental illness and addictions led him finally to a homeless shelter in Vermont where Laurel helps stabilize him and he finds a year of peace before he dies. Is it possible that Bobby Crocker is the lost second child of Tom and Daisy Buchanan? Or that Pamela Buchanan wants these pictures back for reasons unrelated to her desire to rehabilitate her mother’s legacy as the lover of Jay Gatsby?

Laurel herself is a damaged person on the way back from a brutal rape attempt seven years earlier. Her recovery has been slow but steady and her work at the shelter very successful. She’s a dedicated professional with a few personal friends, and admitted daddy fixation in the men she’s chosen to be with, and this new interest in finding out about Bobby Crocker’s life and legacy. She’s also more than an amateur photographer, so her interest here becomes more and more professional. It also becomes very personal when she finds among Bobby’s photos an image of a young woman on a bicycle on the road on which she was brutally attacked.

Bohjalian writes compellingly of Laurel’s past and her attempts to deal with Bobby’s legacy, family, and the story behind these famous “literary” characters. There is no way in a review to say much more than this: trust him. Many times we read stories that take us down country roads and (forgive) lead us into red herring traps. Not here. The story unfolds so naturally and with such reality that nothing outlandish seems outlandish at all. That the end of Laurel’s adventure will legitimately turn your head inside out is a major achievement. The clues were all there and all is done fairly without smoke and mirrors. Or photographs.

Do you want to add feedback to this story? Please add comments in the box below.