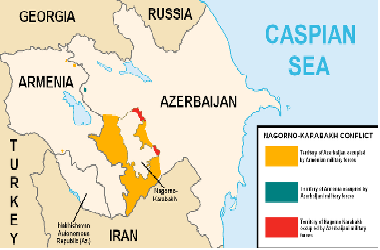 Charges and counter-charges continue between Armenia and Azerbaijan’s leadership amid brutal attacks on the civilian population.

According to the latest press reports, thirteen civilians have been killed, and more than 40 people were injured in an early-hours missile attack on Azerbaijan’s second-biggest city, Ganja.

A missile raid leveled a row of homes in Azerbaijan’s second city of Ganja, killing and gravely injuring people in their sleep in a sharp escalation of the Nagorno-Karabakh conflict.

The Armenian defense ministry denied the claim and accused Azerbaijan of continuing to shell populated areas inside Nagorno-Karabakh, including Stepanakert, the region’s biggest city.

Both sides signed a Russian-brokered truce last weekend; however, the conflict has continued unabated.

Here are some key facts about the region: