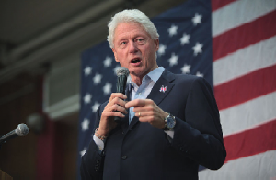 A meeting by happenstance between former President Bill Clinton and current Attorney General Loretta Lynch has created a political storm in both the traditional and social media.

This comes against Hillary Clinton meeting at FBI headquarters — for a full three and a half hours — answering questions about her use of a private email server for official business as secretary of state.

To quote Donald J. Trump, what the hell is going on? Well, the Republicans wasted no time in charging that the meeting was a sinister move by the former President to influence the outcome of an investigation his wife is currently under by the FBI.

On the news of the meeting, the Republican Party nominee Donald Trump said there’s no innocent explanation for the airport tarmac meeting between Bill Clinton and Lynch.

“Only a fool would believe that the meeting between Bill Clinton and the U.S.A.G. was not arranged or that Crooked Hillary did not know,” Trump said.

Furthermore, Trump added, “It is impossible for the FBI not to recommend criminal charges against Hillary Clinton.”

He also tweeted, “What she did was wrong! What Bill did was stupid!”

Now, caught in the middle of the crosshair of the political divide, Lynch was forced to provide an explanation for the meeting.

She reportedly told the press that the meeting with Bill Clinton “does not have a bearing on how this matter will be reviewed and resolved.”

She further added that she would accept the determinations and findings of the FBI in their probe of Clinton’s email use.

She also said she “certainly wouldn’t do it again, because I think it has cast a shadow over what it should not, over what it will not touch.”

The fact is there was nothing untoward in the meeting of two comrades unless civility is being thrown away at the expense of political expediency.

The truth is all the talks entail according to people familiar with the matter was the exchange of pleasantries, grandchildren, golf, and the weather.

However, don’t tell that to the Republicans or chairperson of the Republican National Committee Reince Priebus who spins it thus:

“The American people need to have confidence that the Obama Justice Department is conducting a fair and impartial investigation, but when the attorney general meets secretly with Bill Clinton just days before Hillary’s interrogation is conducted discreetly over a holiday weekend, it raises serious concerns about special treatment.”

The fact of the matter is, the meeting was bad optics partly because of perception and the cultural-political morass the country is in as the 2016 Presidential election draws to a close.

Any  reading into the meeting other than bad optics  would by default  make it an “airport tarmac summit” and by extension clutching at straws.

Do you want to add feedback to this story? Please add a comment in the box below or send us an email at infothereadersbureau.com