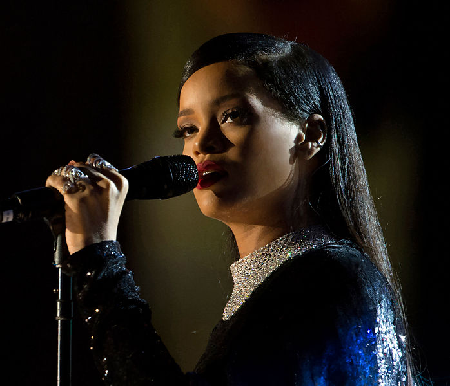 The Barbadian singer and songwriter Robyn Rihanna Fenty, popularly known as Rihanna, is now officially the best-selling solo recording artist of all time.

The singer who hails from Saint Michael and grew up in the capital, Bridgetown, Barbados, first entered the music industry by recording demo tapes under the direction of record producer Evan Rogers in 2003.

She later signed a recording contract with Def Jam Recordings after auditioning for its then-president, hip hop producer and rapper Jay-Z.

Today, the 28-year-old and 5′ 8″ (1.73 m) diva is not only a renowned singer and songwriter but also a business woman, fashion designer, model, and actress.

Just a mere 10 years into her musical career, she has become the youngest solo artist to score 14 no. 1 singles on the billboard hot 100 — the fastest to do so — she’s sold more than 54 million albums and 210 million tracks worldwide.

Rihanna is also the “best-selling digital artist of all time… with more than 100 million [riaa] gold & platinum song certifications” and an eight-time Grammy award winner.

Her recent certifications include hits such as Needed Me, Love on the Brain, Work, Sex with Me and Kiss It Better from her most recent studio album dubbed ANTI.

A look at the total certified sales (worldwide) of seven acts (solo artists and bands) that have exceeded 150 million total global certifications gives an indication of the significant and phenomenal achievement of the Bajan superstar — Rihanna.