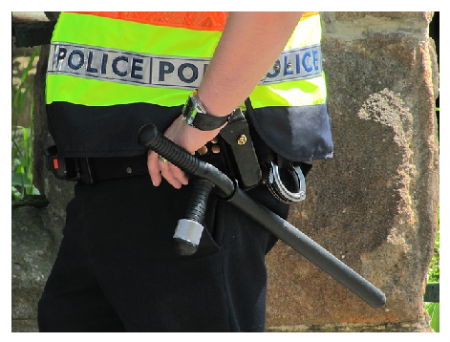 The police force is a constituted body of able-bodied men and women empowered by the state to enforce the law, protect property and limit civil disorder.

This therefore means that the police force is not only credited with a tremendous amount of responsibility, but also holds authority that is not given to other citizens.

Consequently, they must be judge at a higher standard as well as held to greater scrutiny.

There is no doubt that citizens in general love and respect the police and have accorded them the title of hero that has now become a mantra in the U.S. since 9/11.

The truth is policing is no easy work, comes with a paltry salary, and moreover, is compounded by the fact that the men and women in uniform, once on active duty, they are at risk of not only being harmed, but also losing their lives. However, it is rather troubling when members of the police force on a solemn occasion such as that of a funeral decides to show disrespect for not only its leader, but by extension grieving family members, friends and a city, in general.

The fact is a political protest as expressed by some members of the police force by turning their back on New York City Mayor Bill de Blasio during his speech on two separate occasions at the funeral services of officers Wenjian Liu and Rafael Ramos, respectively is totally unwarranted.

One understands the angst of the police, but their action is at the wrong place and time.

It is even more disheartening to see the persistent display of their action despite their own commander, Commissioner William Bratton, appeals for them to show restraint in their behavior.

Moreover, do members of the police force expect our leaders to remain silent when injustice is being meted out to citizens?

Furthermore, the report in the press of some members failing to engage in active duties in continuation of their protest against the mayor is tantamount to not only a tantrum but also a holdup for ransom.

How long will members of the police force continue their action, is still left to be seen, but right now they are certainly sending a wrong message to members of the public.