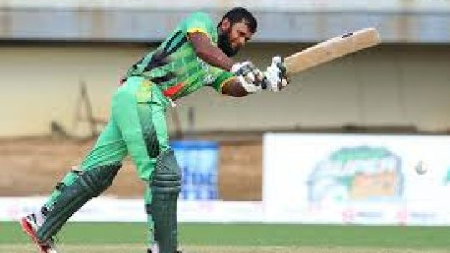 Assad Badyr Fudadin, the 31 year-old born Guyanese cricketer will be seeking to parade his skills for the Scorpions when West Indies Professional Cricket League (PCL) gets underway later this year.

The left-handed batter and right-arm medium-fast bowler has not only been around the Guyana national cricket setup for a long time, but also has had a fleeting spell playing for the West Indies.

Fudadin started playing cricket at an early age. He was selected in 2000 to play for the West Indies Under-15s team at the Costcutter Under-15s World Challenge, at which he top-scored in the final with 55 off 92 balls as the West Indies beat Pakistan.

The following year, he progressed to the Guyana Under-19s team, for which he played for two years before being selected for the West Indies U19s.

He made his first-class debut in 2004, playing for the West Indies B team against Kenya in the 2003–04 Carib Beer Cup.

In 2012, Fudadin made his debut with the senior West Indies side for their summer tour of England, but was ignored until the last match of the series. He played for the Windies against New Zealand later that year but has not worn the maroon colors since then.

Fudadin is now seeking to revolutionize his cricket by joining force with the Jamaica Scorpions cast.

He heads the five players added to the Jamaica Scorpions roster.

On Thursday, the Jamaica Scorpions announced its 10 protected players for the PCL which begins in November and on Friday its draft players were revealed.

Scorpions head coach Robert Samuels noted that the inclusion of the left-handed batsman Fudadin could be crucial.

“He played for West Indies and few years ago and has decided that he wants to come here and play cricket and we’ll welcome him,” said Samuels.

The scorpions have also decided to stick with overseas player Trevon Griffith, who is into his third season with the franchise.