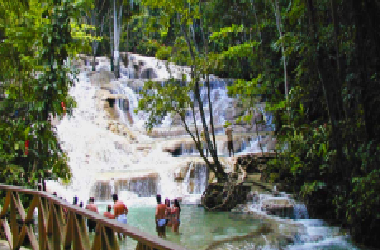 In March 2018, I set foot on this beautiful island, Jamaica, for the first time. Over the past four years, I have climbed the scenic Blue Mountain, visited the natural Dunn’s River Falls, watched the glorious sunset over the Lovers Leap, visited the beautiful beach in Montego Bay, tasted the aromatic Blue Mountain coffee and Appleton rum, enjoyed the iconic reggae music, and fully experienced the unique and charming Jamaican culture.

Over the past four years, I have had the privilege to meet and make friends with Jamaicans from all walks of life, and have been deeply touched by their kindness and hospitality.

Over the past four years, I have witnessed and contributed to the continuous advancement of China-Jamaica relations and the cooperation between the two countries in various fields such as politics, economy, trade, infrastructure, education, health, and international seabed, and been impressed by the great potential of the cooperation between our two countries as well as the vitality of the friendship between our two peoples.

I still remember that the Most Honorable Andrew Holness, Prime Minister of Jamaica, led a delegation to attend the Second China International Import Expo and paid an official visit to the People’s Republic of China in November 2019. The bilateral relations between China and Jamaica were elevated to strategic partnership. Jamaica became the first Caribbean country forging a strategic partnership with China, marking a milestone in the development of China-Jamaica relations.

In the past four years, I have witnessed the lobster, rum, and Blue Mountain coffee from Jamaica getting more popular in China. I have witnessed the completion of the new headquarters of the Ministry of Foreign Affairs and Foreign Trade of Jamaica, which officially came into service in January 2022. I have witnessed the new building of the Confucius Institute at The UWI, Mona, accommodating a large number of Jamaican students attracted by the Chinese culture.

I was very delighted to see the smiling faces of Jamaican children in the China-Aid early-childhood institutions. The Southern Coastal Highway Improvement Project will be completed within this year. The Huawei Jamaica ICT Talent Hubs will continuously boost the development of Jamaica’s digital economy. It is firmly believed that the high-quality Belt and Road cooperation between China and Jamaica will surely be promoted to a new level and bring more benefits to the people.

I still remember how deeply moved I was when seeing the joyful tears of the patients who benefited from the Bright Journey Project ophthalmology therapy, which returned a colorful world to 500 Jamaican cataract patients. I still remember the ceremonies at which I awarded the Chinese Government Scholarship to Jamaican students and the Chinese Ambassador’s Scholarship to more than 100 students from four universities to support them in completing their education.

I have sent off more than 1,000 Jamaican employees, students, and athletes to China for various training programs and welcomed several Chinese teachers to teach Mandarin in Jamaica, all of whom were encouraged to be messengers of the people-to-people and cultural exchanges between China and Jamaica.

I still remember that China and Jamaica have been supporting and assisting each other to fight against the novel coronavirus pandemic since its outbreak in early 2020. China has made contributions to Jamaica’s fight against the pandemic and its economic recovery. China will continue to provide assistance to support Jamaica and believes that the Jamaican Government and people will defeat the virus and revive the momentum of economic and social development.

The year 2022 is a special year as it marks the 60th anniversary of Jamaica’s Independence and will witness the convening of the 20th National Congress of the Communist Party of China. This year also marks the 50th anniversary of the establishment of diplomatic relations between China and Jamaica. Standing at a new historical starting point, I firmly believe that the China-Jamaica Strategic Partnership will be further enhanced and raised to a new level and the China-Jamaica traditional friendship will be consolidated and refreshed, as long as our two countries continue enhancing political mutual trust, deepening practical cooperation, strengthening the people-to-people exchanges, and working together to promote the high-quality Belt and Road cooperation, implement the Global Development Initiative, and build a community with a shared future for mankind.

I will end my tenure in Jamaica and leave this lovely island. I would like to take this opportunity to express my most sincere gratitude to all my friends in Jamaica, to all the Chinese compatriots, to all who support China’s development and contribute to the China-Jamaica friendship, and to all who have provided precious support to me during my tenure. Thank you. I believe that all of my friends will continue to give their valuable support to the Chinese Embassy in Jamaica in the future and jointly create a brighter future for the China-Jamaica relations.

May there be prosperity for China and Jamaica.

May there be long-lasting friendship between the Chinese and Jamaican people.