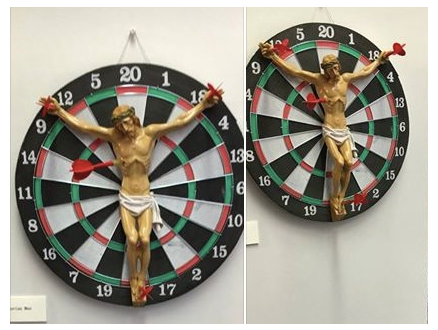 An art piece, titled “Vitruvian Man,” exhibited in the Art Library on Voorhees Mall at Rutgers University has invoked the wrath of some students and other stakeholders both inside and outside the university community.

The art featured four darts nailed into a Jesus figure depicted on a dartboard.

The artwork went viral after a student at Rutgers posted images of the “Vitruvian Man” on her Facebook page, writing: “This is currently displayed in the Art Library on College Ave. It is surprising that a state university would allow this. I asked them to take it down because I found it disrespectful and they refused. How is this acceptable!?”

Following the outrage by students and members of the public, the university administrators have acted by having the display removed.

She also noted that the policy and process the libraries use to select artwork for exhibitions was not followed.

“The art exhibit inside a campus library at Rutgers University was sickening – Jesus crucified on a dartboard,” conservative commentator Todd Starnes wrote. “I’ve often wondered why the artistic class seems compelled to denigrate and desecrate the Sacred.”

On the other hand, some people view the piece as an artistic expression and argued that the image of Christ on a dartboard could actually be meant to showcase how Jesus was treated rather than denigrating the Christian figure.

At the same time, others took the stance that the creator of the artwork would never have done a piece on the prophet Mohammed for display, so why Jesus they reasoned.