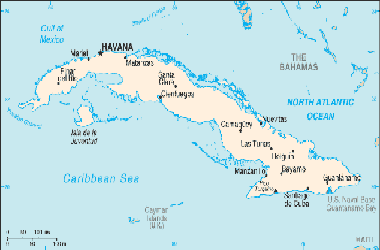 Ferrer’s sister, Ana Belkis Ferrer García, who is in exile and a member of the Patriotic Union of Cuba (UNPACU), a political party that opposes the current government, posted on Twitter, “I am being informed from Santiago de Cuba that a young woman saw hit men arresting my brother and taking him away from the headquarters (of the UNPACU party). Other hired assassins are still inside, they are painting the walls and removing the ‘Patria y vida’ posters, among others”.

Garcia  further pointed the finger at the Cuban government’s highest officials, claiming they’re responsible for what may happen to her brother.

“I hold Raul Castro, Miguel Diaz-Canel and their henchmen responsible for what may happen to the physical and psychological integrity of my brave brother, his family and activists inside the main headquarters of UNPACU in Reparto Altamira, after an assault by their repressive forces,” she said.

Meanwhile, EFE reported that Jorge Castro, another opposition leader, has condemned the attack on UNPACU headquarters by the police.

Ian Gómez, Ferrer’s neighbor, reported that “a huge operation was deployed against the UNPACU headquarters.” He said that “troops from the “Policía Nacional Revolucionaria,” (PNR) arrived with multiple vehicles, including motorcycles, cars, trucks and filming equipment.”

He said further that once the police took control of the premises, they established a perimeter prohibiting access.

Daniel Ferrer was with his wife, young children, and other people who work in UNPACU at the time of his arrest.

Last Wednesday, Ferrer himself had denounced in his social networks an attempt of aggression against him: “Two agents of the regime, pretending to be garlic sellers, attacked me. You see. Two agents of the tyranny came to attack me and this is the response of the people outraged by cowardice.”

At the same time, the  U.S. government has already spoken out and demanded the release of the opposition leader: “His arbitrary detention and the raid on his organization are unacceptable, democracy and human rights in Cuba remain a pillar of U.S. foreign policy. Ferrer should be released immediately and his house imprisonment must end,” said Julie Chung, assistant secretary of the Bureau of Western Hemisphere Affairs at the State Department.