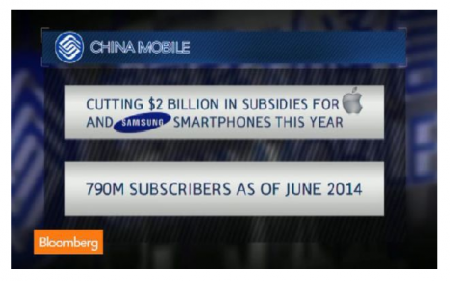 According to Bloomberg.com, the world’s biggest phone market is getting a lot tougher for Apple Inc. (AAPL) and Samsung Electronics Co. (005930)

China Mobile Ltd. (941), the biggest carrier, is cutting subsidies by $2 billion in a sign the industry is less willing to pay for expensive devices like the iPhone and Galaxy S. That may accelerate growth for Chinese makers Xiaomi Corp. and Lenovo Group Ltd. (992) that offer similar features for lower prices.

The 38 percent cut comes after government regulators were said to tell China’s three carriers to lower marketing expenses, changing a practice that spurred sales of premium handsets to a wealthier population. The order may save the companies $6 billion and further shift the balance of power after Samsung lost the top spot in market share last quarter and Apple failed to crack the top five in sales.

“High-end flagship phones will suffer the most from the regulation due to their prohibitive prices in the China market without subsidies,” said Lydia Bi, a Shanghai-based analyst at researcher Canalys. “Samsung and Apple, as the two major high-end flagship phone makers, have the most to lose.”