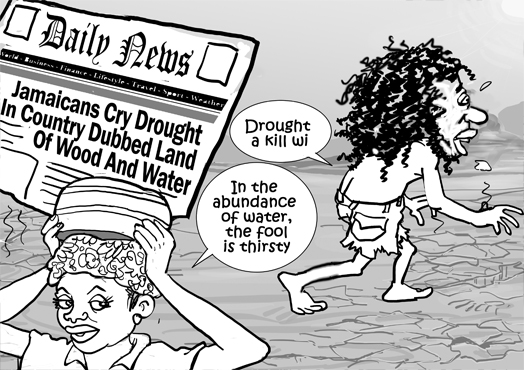 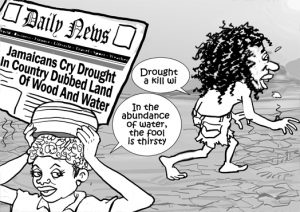 In the abundance of water, the fool is thirsty

The revolutionary development of the wheel which occurs during the copper age 4500–3300 BCE is by far one of the most significant and important inventions of humankind.

The point is the wheel, though an old initiative has evolved to open the technological path that currently obtains in all sectors of society today.

Now, when the British offered Jamaica its independence fifty-six years ago, they left the country with a number of catchments, canals, and knowledge of building water tanks, befitting the size of the population.

Today, the population size has grown significantly and to date not much has been done beyond the British legacy to harness potable, much less agricultural water to meet the needs of thousands of people throughout the island.

Some of the screaming perennial headlines that one is greeted with over the years are:

The foregoing, of course, comes against the background of a country named Xaymaca “land of wood and water,” by its original inhabitants – the Tainos.

Given the recent drought and water crisis plaguing the island, the populace must ask where is the water, Mr. Prime Minister?

The fact of the matter is Jamaica of all the countries in the Western hemisphere should not be experiencing water problems, not yesterday, not today, and not ever.

Any inquiry made at the Meteorological Office will show the casual observer Jamaica’s seasonal rain pattern over the past 40 years, therefore, information and data are not an issue.

The issue is a drought in leadership and an inability to think outside the box. The effective collection, storage, and distribution of water have been lacking for years in Jamaica without any concerted attempt made to address the problem by either the JLP or PNP led government.

The current government, in its 2017-18 Throne Speech delivered by the Governor-General announced that it is going to tackle the water problem by addressing the issues of leaks, theft, bypasses, illegal connections, overflow tanks, estimated water readings, and the under-registration of customer meters – a theme repeated by respective government time and again.

No new bold ideas or initiatives from the political directorate, and moreover, the typical response to any question posed on the matter is, our hands are tied by the IMF – no money.

Now, whereas one sees Edmund Bartlett, the Minister of Tourism flying overseas to seek and form partnerships with governments and private entities to increase tourist arrivals, there is little or no such effort by the water portfolio minister to access help from overseas.

Is water life? At least, the former government thought so and would often trump it as a mantra in raising people’s consciousness of the importance of this commodity.

That said, if water is such a valuable and precious commodity, it begs the question, why hasn’t the government paid particular attention to the effective and efficient harvesting of the vast amount of water in the country?  This would certainly avoid the yearly cry of drought and water crisis, would it not?

That seems to be the attitude of the government every time the country is faced with the perennial drought problem; thus, there is no urgency to do anything long-term but to wait the drought out by trucking water to the affected areas and at the same time gain local politicians some political stripes.

If the government were serious about arresting the water crisis in Jamaica, concerted attempts would have been made over the years to access overseas resources to help with the problem.

For example, the Dutch are known for their innovation and creativity in water management. Is the current government seeking to tap into that type of experience and learn from the Netherlands’ best practices?

Israel, known for its mining of water from the desert, is certainly another country Jamaica could look to for help in harvesting its water but are they?

Of course, this is by no means an attempt to deny the knowledge and skills set of local experts but working collaboratively with overseas experts is just part of doing business in the 21st century.

Jamaica, unlike, for example, many African countries has an abundance of water in its skies, underground, as well as above ground.

The quest, however, is for the country to harvest and manage its water through the resourcefulness of its people along with important overseas partners.

Water ought to be Jamaica’s white gold in the long-term, and the government must position the country to meet the crisis that is bound to come globally due to climate change.

However, unless the government incorporates this commodity as part of its long-term strategic plan, it will miss out on opportunities locally and internationally in the future.

Notwithstanding, the government seems to be inadvertently telling the people – rain soon fall!