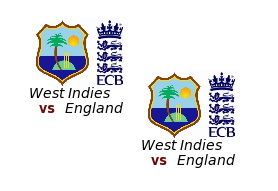 England produced a remarkable victory in the second Test after a seemingly moribund contest was brought to life by the brilliance of James Anderson and the seemingly ineradicable flaws in West Indies’ game. Anderson was the inspiration during a helter-skelter morning session in which England ripped out six wickets and Alastair Cook was there at the end to complete a run chase that was as sedate as it would have seemed unlikely 24 hours earlier.

West Indies lost 8 for 83 in 30.4 overs either side of lunch, surrendering a position of relative security with indecent haste and undoing four days of hard work. England, who seemed to have been blunted on the fourth evening as Kraigg Brathwaite compiled a determined century, seized the moment with alacrity after Anderson took three quick wickets with the new ball.

Victory, one reminiscent of their one-session mugging of Sri Lanka at Cardiff in 2011, put England 1-0 up in the series. The prospect seemed a distant one at the start of the day, with West Indies having erased their 165-run first-innings deficit only two down. There was little in the pitch to help England’s bowlers and it was appropriate that Anderson was the catalyst, as he was during their last overseas Test victory, at Kolkata in 2012.