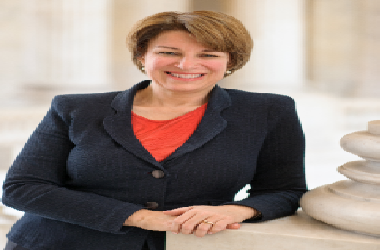 Amy Klobuchar, the 60-year-old Minnesota Senator, has declared herself not interested in Joe Biden’s running mate vacant position in the upcoming U.S. presidential election in November.

Ms. Klobuchar claims that she is not only stepping aside, but also recommending that Biden choose a woman of color to be on the ticket as his running mate.

She received the early endorsement of the New York Times editorial board for the presidential candidate, along with Elizabeth Warren.

Seen as an early front-runner, the senator faced scrutiny amid protests over the death of George Floyd, a 46-year-old black man, who was killed in Minneapolis, by a police officer.

Klobuchar’s political positions have generally been in line with modern American liberalism.

She is pro-choice on abortion, supports LGBT rights and the Affordable Care Act, and was critical of the Iraq War.

During the 115th Congress, she voted in line with President Donald Trump’s position on legislation 31.1 percent of the time.

Her career as a local prosecutor in Minneapolis was brought under scrutiny, and she faced criticism for not bringing charges against multiple police officers who were involved in shootings during her seven years in office.

In withdrawing from consideration to be Joe Biden’s running mate, Klobuchar said, “After what I’ve seen in my state and what I’ve seen across the country, this is a historic moment, and America must seize on this moment,” she said during an MSNBC interview.

She added, “I truly believe, as I told the vice president last night, that I believe that this is a moment to put a woman of color on that ticket.”