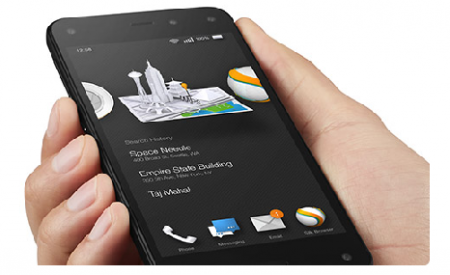 On the back of poor second quarter earnings, Amazon the leading global Internet company and one of the most trafficked Internet retail destinations up the ante with the launch of its first cell phone on the consumer electronics market.

The Amazon Fire Phone though up for pre-order for sometime made its way into consumers’ hands for the first time last week when it went on sale exclusively at AT&T.

Amazon has also created its own maps app and provides Mayday service which enables users to connect easily to live technical support. The battery life of the Fire Phone is reported to fall below the average expectation of a day.

Early reviews of the Fire Phone have been mixed. According to hands-on report by the Wall Street Journal, the map got the location wrong and the battery life is unimpressive. In addition, there is missing Google apps and complicated navigation.

The Amazon phone has also gotten a rapt from reviewers on its pricing strategy as in the opinion of many though a reasonable phone based on its specs, it is in no way in the league of Apple and Samsung smartphone.

In a report, CEO Jeff Bezos opined that one should not expect Amazon to panic if its first phone is a flop. He told The New York Times “We have a long history of getting started and being patient. There are lot of assets you have to bring to bear to be able to offer a phone like this. The huge content ecosystem is one of them. The pieces in place, It’s our job to keep inventing and to be patient. One thing leads to the next.”