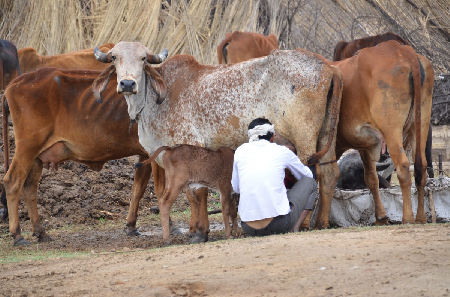 According to press reports, two people including a police officer were killed in northern India during violent protests by over 400 villagers based on suspicions of cows’ slaughter.

Inspector Subodh Kumar Singh and a 20-year-old man died after clashes erupted in a village in Uttar Pradesh state’s Bulandshahr district, when carcasses of animals, including a cow, were reportedly found on a farm.

“After the villagers found a dead cow, they took to the streets. They blocked a road with a tractor and pelted stones,” a senior police officer reportedly said.

Local news channel NDTV reported the protests started after the carcasses of 25 cows were discovered dumped outside the village.

The slaughtering of cows in India is forbidden in many states.

Cows are revered in India, a predominantly Hindu religious society.

India’s Prime Minister Narendra Modi has condemned the attacks and promised to take severe actions against the perpetrators.

The Indian Supreme Court had earlier this year asked the government to enact new legislation to end an increase in mob violence and lynching.

Many people have lost their lives by mob killings after being accused of cattle theft, eating beef, child kidnapping, and other crimes.