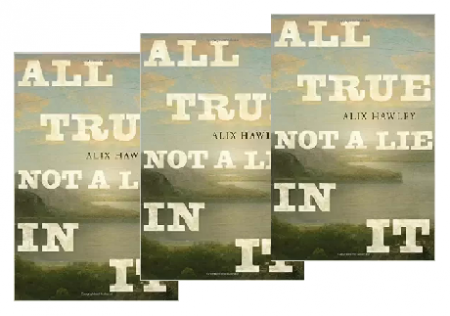 In a press release, Amazon.com reported that Amazon.ca and the Walrus Foundation have presented Alix Hawley with the Amazon.ca First Novel Award, which celebrates the remarkable achievement of a first-time Canadian novelist. Hawley’s novel All True Not a Lie In It (Knopf Canada) earned her the title of this year’s Amazon.ca First Novel Award winner and $7,500 at this year’s award ceremony, held at The Four Seasons in Toronto and hosted by CBC’s The Next Chapter radio host, Shelagh Rogers.

“Every year, we are fortunate to receive submissions that celebrate and illustrate incredible Canadian talent and creativity. This year, the finalists took us around the world with five unique stories,” said Alexandre Gagnon, country manager for Amazon.ca. “We’re delighted to support a program which recognizes Canadian first-time novelists. Congratulations to all who participated in this year’s Amazon.ca First Novel Award.”

A tall tale like no other, All True Not a Lie In It is set during the American Revolutionary War. It tells the story of folk hero and pioneer Daniel Boone in his own voice. Boone recounts his childhood in a Quaker colony, his capture—and eventual adoption—by the Shawnee, and his personal triumphs and tragedies. Hawley has also published the short-story collection The Old Familiar and her work has won multiple accolades from CBC’s Canada Writes competition. Born in Vancouver, Hawley now resides in Kelowna, British Columbia.

In addition to Hawley, the 2015 Amazon.ca First Novel Award finalists include Etta and Otto and Russell and James by Emma Hooper (Hamish Hamilton), Us Conductors by Sean Michaels(Random House Canada), New Tab by Guillaume Morissette (Esplanade Books) and Pedal by Chelsea Rooney (Caitlin Press), all of whom earned $1,000 and a $450 Amazon.ca Gift Card.

“All True Not A Lie In It is a remarkable act of literary ventriloquism. Alix Hawley fully inhabits the character of Daniel Boone, creating a novel that is richly detailed, beautifully written, and intensely moving,” said Helen Humphreys, award-winner author and Amazon.ca First Novel Award judge.

Over the last three decades, the First Novel Award has recognized outstanding literary achievements by first-time Canadian authors and has launched the careers of some of Canada’s most beloved novelists, including most recently, Wayne Grady for Emancipation Day, Anakana Schofield for Malarky, David Bezmozgis for The Free World and Eleanor Catton for The Rehearsal.