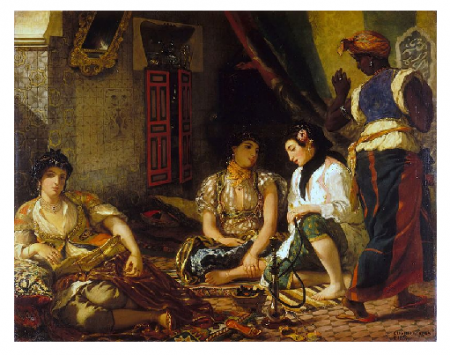 According to Aamir R.Mufti in the article “Orientalism and the Institution of World Literatures,” the introduction of literature from Asia and the Middle East to the West had important effects both in the West itself and in the cultures from which these literatures originated.

“The arrival in Europe and into the European languages of works originating in the classical languages of Asia and the Middle East,” he says, “had far-reaching effects on generations of writers in the West.” Mufti discusses both linguistic and literary repercussions of this phenomenon, citing the introduction of new words from Persian, Arabic, and Sanskrit into the English language, as well as Western writers’ adoption and adaptation of forms from these traditions.

“Schwab,” says Mufti,”…went so far as to view the rise of romanticism as little more than the extended “literary repercussions” of the Orientalist knowledge revolution. He discusses the wide-reaching influence of William Jones’ translations of Middle Eastern and Sanskrit texts, including Turkish poet Hafiz and his poetic form of the ghazal, and the Sanskrit writer Kalidasa.

The appropriation of Indian texts by the West had considerable effects on India itself. Mufti says that prior to the West’s discovery of the subcontinent’s literature, there was not any consideration of a uniform “Indian” culture or literature, but “rather a loose articulation of different, sometimes overlapping but often mutually exclusive, systems based variously in Persian, Sanskrit, and a large number of the vernaculars, often more than one on in a single language, properly speaking.”

It was only with the West’s interest in Orientalism that a supposedly cohesive Indian culture and literature emerged. This idea was adopted by the “Indian intelligentsia,” an elite group who were influenced by and associated with the colonists.

There arose the idea that the West had given India its own culture as a gift, “a selfless gift,” as Mufti ironically states,” from colonizer to colonized, of the latter’s past conceived as History.” The emergence of this idea and of the Indian intelligentsia gave rise to nationalism in India.

Colonialism also brought Western-style education to the Indian subcontinent, and created the phenomenon of Indian writers who were educated in English and wrote in English. Mufti also discusses the emergence of Hindi and Urdu as the two predominate languages in India, and asserts that Hindi was deemed superior because of its relationship to Sanskrit, which came to be seen, through Orientalism, as epitomizing this authentic “Indian” cultural and linguistic heritage.

Mufti concludes his essay by discussing the modern literary climate in India, in which most of the internationally recognized literature is written in English, a direct result of the assimilation that took place during colonization. However, he also asserts that traces of India’s linguistic heterogeneity can be found even in these Anglophone works.

He ends by saying that in order to teach “world literature” in a way that is useful, we need to examine the social reality and this history of assimilation, colonization, etc., that is evident in the works that we consider to be part of that literature.