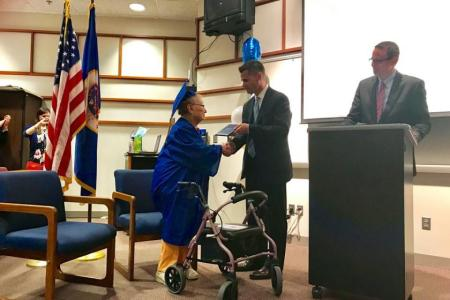 Age could not stop 88-year-old Holocaust survivor Esther Begam from walking down the aisle to collect her high school diploma.

This was a dream come true for Begam, given the denial of a high school education by the Nazis decades ago.

Amidst cheering multiple generations of family members, well-wishers, and students, Begam exuded joy as she proudly accepted her award.

Begam grew up in Poland, but under the Nazi regime she had to quit school at 11 and was forced move into a Jewish ghetto. Later, she was sent to a forced labor camp.

After the Nazis took control of Poland, she never heard from her father, who was a rabbi and chaplain in the Polish army.

She also lost her mother and brother at Auschwitz. Additionally, she lost her older sister and every other member of her extended family at other camps.

Begam got married to a fellow Holocaust survivor at an early age and together they later moved to the U.S.

A student asked Begam what her biggest regret was, and her answer surprised Ledman.

Ledman wanted to do something about this, and when new Principal Scott Gengler arrived on campus, he loved the idea of giving Begam an honorary diploma.

This month, Ledman’s class set up a ceremony just for Begam, complete with a special cake and her own cap and gown.

In front of proud family, friends, and students, Begam accepted her diploma.