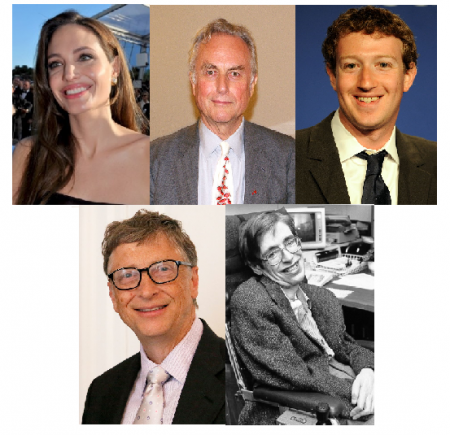 Here are top 5 top celebrities who either disbelieve in the existence of God or claim neither faith nor disbelief in God.

Dawkins was born in Nairobi, Kenya, on March 26, 1941. He is an English ethologist, evolutionary biologist, and writer. He has been married three times and has one daughter. He is an avowed atheist and vice president of the British Humanist Association.

“We don’t need God for this universe to have been created,” said Hawking, “…And any idea of heaven, or afterlife, does not exist,” he continued, according to a press report.

Zuckerberg was born in 1984 in White Plains, New York. He was raised Jewish and had his bar mitzvah when he turned 13. Today, Mark describes himself as an atheist.

Do you believe in God? A question put to Bill Gates in a Rolling Stone magazine interview. He answered thus:

“I agree with people like Richard Dawkins that mankind felt the need for creation myths. Before we really began to understand disease and the weather and things like that, we sought false explanations for them. Now science has filled in some of the realm – not all – that religion used to fill. But the mystery and the beauty of the world is overwhelmingly amazing, and there’s no scientific explanation of how it came about. To say that it was generated by random numbers, that does seem, you know, sort of an uncharitable view [laughs]. I think it makes sense to believe in God, but exactly what decision in your life you make differently because of it, I don’t know.”

The superstar actress has been quoted saying “There doesn’t have to be a God for me. There’s something in people that’s spiritual, that’s godlike.”