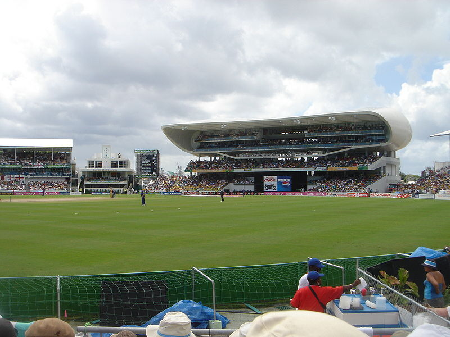 The Kensington Oval, dubbed  “The Mecca,” is one of the pre-eminent sports grounds in the West Indies.

It is located in the capital city, Bridgetown, Barbados.

This over 146-year-old cricket ground is not only loaded with history but also holds profound memories for both players and cricket fans locally and internationally.

January 1930 marked the genesis of Test cricket at the Oval with a match between West Indies and England.

Since then, there have been 43 Test matches played at the ground, with Windies winning 21 of these matches.

The Oval has evolved over the years to win the Institution of Structural Engineers awards and is viewed as an inspiring structure and an outstanding addition to the Barbados skyline.

It commands attention and is immensely popular with cricket fans and players around the world.

That said, here are 5 things not to expect at the Oval on Sunday when the Windies takes on Pakistan in the second of the three-match Test series.

Although technology has made it easy for people to watch sports from the comfort of their living rooms, sports players need live audience not only to cheer them along but also get them fired up and keeps the adrenaline flowing. Now, to get the fans out to games, teams cannot afford to be loss leaders, unfortunately, today, this is the position in which Windies has found itself — sporadic wins will not get fans beating down the gates to watch them play.

The fact is Windies has not produced a star cricketer since Bryan Lara, and that is over a decade ago. Yes, there are “icons,” “dons” and “universal bosses,” but even then, fans demand stars, so until then, the crowd support will not be at play.

Gone are the days when West Indies team comprised four bowlers who each were able to bowl at over 90mph, thus earning themselves the nickname “the four horsemen of the apocalypse,” — Michael Holding, Andy Roberts, Colin Croft, and Joel Garner.

Today, not even the Kensington Oval wicket responding to pace as it once did. So, one should not expect the pace bowlers to do the trick for either team.

3) Change in batting order or team

Windies team management has failed time and again to think outside the box and apply a little creative thinking to their team set up and game plan. Also, the current captain has shown a lack of creativity on the field of play when the situation demands that the Windies apply the juggernaut or use the roper-doper to banish the opposition.

People who have become accustomed to hearing the voice of Winston Anthony Lloyd “Tony” Cozier, the late Barbadian cricket journalist, writer, and radio commentator on West Indian cricket will only be able to reminisce and reflect on the glorious past in commentary.

Cozier, described as having an “encyclopedic” knowledge of cricket, has made his transition, and today, fans are poorer for it.

The last occasion on which Barbados suffered a direct hit from a major hurricane was in 1955. Barbados weather is generally warm and sunny all year round with an average daytime high of 30°C / 86°F.

That said, the country lies in the tropics and therefore is most likely to get some quick showers, but sets to drain off at a fast rate into the underground lakes or the sea. The forecast calls for rain on Tuesday and Thursday.