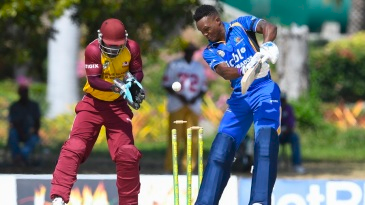 The foregoing is an old traditional country and western song that is sung in churches throughout the Caribbean region, and its interpretation within the construct of the Super50 competition is left up to the reader.

The fact of the matter, however, the Leeward Islands Hurricanes were not able to answer that call in the semi-final against Barbados Pride.

Consequently, they suffered a heavy defeat, losing by 110 runs in the second day/night semi-final of the Regional Super50 at Coolidge Cricket Ground.

The Hurricanes, therefore, are left with no choice but to settle for a bridesmaid position.

Now, pundits and fans have posited various reasons for the Hurricanes loss, 5 of which include the following:

1. The Hurricanes allowed the Barbados Pride’s batsmen to settle without lighting any bowling fire under them. Windies rising star batsman Shai Hope came to the crease in the 10th over with the score on 42 and was allowed to set anchor until the 46th over, thus helping his team to pass the 270 mark, sharing in various partnerships and in the process earning a personal top score of 125. By the time the inning was all over, Kraigg Brathwaite had scored 54, Stoute 21, Chase 31, Holder 42, and Carlos Brathwaite an 11-ball 27 that lifted the score past 300.

2. The Hurricanes’ captain and batsman in chief Kieran Omar Akeem Powell, did not get going and could only manage a score of 3 runs off 9 balls. This score from a man who has been the leading run scorer throughout the series was not good enough on a day when it matters most. Only opener Montcin Hodge who batted until the 39th over, scoring 63 came to the party.

3. The Hurricanes’ bowling may best be described as horrible or disastrous. The bowlers just did not show up — 7 bowlers used, showing an average econ rate of over 7 runs per over was like a nightmare that came true.

4. The Hurricanes did not give heed to the adage, horses for courses; thus their neglect to select the little master blaster and dasher Nkruma Eljego Bonner, the 28-year-old Jamaican leg spin bowler and right-hand batsman. Although Bonner may not have been at the top of his game in the early qualifiers, there is no doubt on whether he has the goods. Bonner has proved that he can be a big match winner and not to select him proved myopic on the part of the Hurricanes.

5. Apart from poor fielding by the Hurricanes which contributed to their woes, one must credit the Bajan Pride for their clinical bowling efforts. The bowlers proved that they were hungry for the win and made no bones about it.