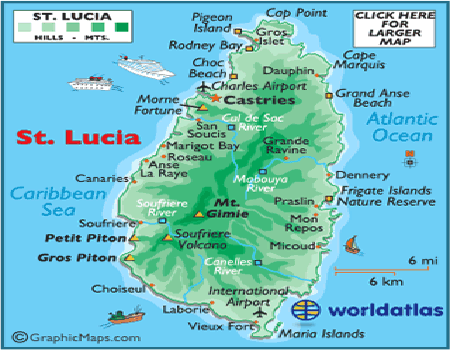 Saint Lucia is an Eastern Caribbean island nation with a pair of dramatically tapered mountains — the Gros Piton which is 771 meters (2,530 ft) high, and the Petit Piton which stands at 743 meters (2,438 ft) tall.

Saint Lucia is one of the most mountainous islands in the Caribbean.

The French were the first European settlers to occupy the island. They signed a treaty with the native Carib Indians in 1660.

In ensuing years, England was at war with France 14 times, and rule of the island changed frequently — seven times each ruled by the French and British.

In 1814, the British took definitive control of the island.

Saint Lucia was known as the “Helen of the West Indies,” given the frequency with which it changed hands between the British and French.

Trails in the interior rainforest lead to waterfalls like the 15m-high Toraille, which pours over a cliff into a garden. The capital, Castries, is a popular cruise port.

That said, once one disembarks on this beautiful and scenic Caribbean island, it’s a ‘treatfest’ until one decides to leave.

Now, here are five of the many places one can go to enjoy paradise on the island.

This 4-acre national park is a notable landmark and though no longer an island – a causeway was built in the 1970s – it is enshrined in history.

It is home to Fort Rodney, an old British military base. It also boasts a small museum which houses relics and artifacts from the battles.

Additionally, it’s a popular venue for picnics and weddings as well as provides a stunning view of the Caribbean Sea and the Atlantic Ocean. It was converted to a US signal station in World War Two, given the 360-degree view it offers.

The Park serves as the venue for the Saint Lucia Jazz & Arts Festival which is held annually in May.

What’s a vacation if there is no letting down of the hair and having fun?

The place to be on a Friday night is the little fishing village called Gros Islet, just north of Rodney Bay.

Here, one gets the local feel by mixing with the residents of this small community.

The entire community is transformed on a Friday night as it is a time for dancing, eating, and drinking.

3. Take a trip to the Diamond Botanical Gardens & Waterfalls

It is located in the town of Soufriere, in the South-Western region of the island.

Nature lovers will find the site fascinating as it possesses a wide range of plants and colorful array of flowers.

The waterfalls originate from underground thermal springs and the rocks that the water spills over are encrusted with minerals tainted with a yellow, purple, and green color.

There are also mineral baths on site which are said to have therapeutic benefits for rheumatism, respiratory complaints, and ulcers.

4. Take a hike up the Pitons

If you are not into adventure or ecotourism, this may not be your speed; however, a climb to the top of the Pitons is not only breathtaking but educational.

The Pitons (Peaks in French) are iconic landmarks in Saint Lucia and are a UNESCO World Heritage designated site.

They are located near the towns of Soufrière and Choiseul Quarter on the southwestern coast of the island.

It is reported that at least 148 plant species have been recorded on Gros Piton, 97 on Petit Piton and the intervening ridge, among them eight rare tree species. The Gros Piton is home to some 27 bird species (five of them endemic), three indigenous rodents, one opossum, three bats, eight reptiles, and three amphibians.

The Gros Piton trail, which takes approximately 4-5 hours, enables visitors to climb to the top of the mountain to take in the breath-taking views of the island.

This beach is tucked away on the island’s northwest side. It is known for its cleanliness, white sands, and crystal clear water and is favorite for both locals and tourists.The expansive shoreline, glorious sunsets, and close proximity to the bars, restaurants, and shops of Rodney Bay allow for an easygoing beach experience.

Take a trip — treat yourself by going to a country that offers something new and different — St. Lucia!