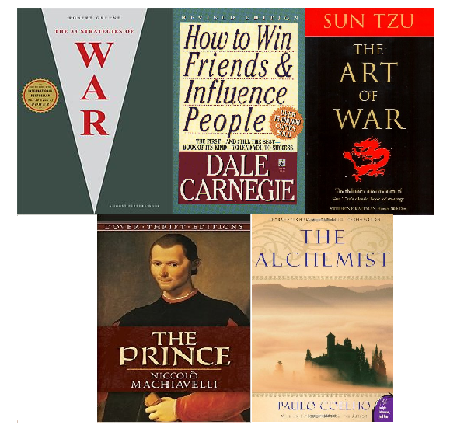 This book is a “guide to the subtle social game of everyday life informed by the … military principles in war.”

It looks at how strategies of warfare can be used in a cut throat competitive corporate environment. The book supports the strategies with stories of leaders such as Hitler, Napoleon, Genghis Khan et al.

2. How To Win Friends and Influence People— Dale Carnegie

This is one of the first best-selling self-help books ever published. It sold millions of copies all over the world.

Carnegie noted, “Personally I am very fond of strawberries and cream, but I have found that for some strange reason, fish prefer worms. So when I went fishing, I didn’t think about what I wanted. I thought about what they wanted. I didn’t bait the hook with strawberries and cream. Rather, I dangled a worm or grasshopper in front of the fish and said: “Wouldn’t you like to have that?” Why not use the same common sense when fishing for people?”

This book is regarded as the most famous and influential of China’s Seven Military Classics, and “for the last two thousand years it remained the most important military treatise in Asia, where even the common people knew it by name.

The book suggests how to out think your opponent, and although it was written for war, it can also be a used to deal with obstacles one encounters in everyday life.

The Prince is a 16th-century political treatise by the Italian diplomat and political theorist Niccolò Machiavelli.

This book is said to be arguably the most influential non-religious work of all time.

“Men should be either treated generously or destroyed, because they take revenge for slight injuries – for heavy ones they cannot.”

The Alchemist is a novel by Paulo Coelho first published in 1988. Originally written in Portuguese by its Brazilian-born author, it has been translated into at least 67 languages as of October 2009.

The Alchemist has many themes, but its overriding message is that people must follow their dreams.

It gives one inspiration and courage to explore physically and spiritually.